1 New iPad Given Away Each Day for the Rest March

Download the free Kingdoms of Camelot: Battle for the North App for the iPhone and iPad for a chance to win the New iPad!

Redwood City, CA -- (SBWIRE) -- 03/19/2012 -- Kabam, the maker of the free game Kingdoms of Camelot: Battle for the North, is giving away 15 brand-new iPads over the next 15 days to the loyal players of the game. Players can enter by downloading the free app at: http://itunes.apple.com/us/app/kingdoms-camelot-battle-for/id476546099?mt=8. Company employees spent several hours procuring the new devices for their loyal fans on launch day.

The promotion, which coincides with the highly anticipated launch of Apple’s latest version of the new iPad, serves as a symbol of thanks for the dedication of the game’s fan base. Kabam will begin giving away the mobile devices on March 17 as part of its St. Patrick’s Day celebrations.

While thousands of people across the country wait in lines just to have the chance to buy the new iPad, we’re giving away 15 of them for free. “This is their way of giving back to the incredible gamers who have made Kingdoms of Camelot one of the best online games out there” said industry veteran Arthur King.

To enter the giveaway, players can simply check their in-game mail for more details. The game is available as a free download in the App Store. Users may also be eligible by visiting the Kabam forum’s St. Patrick’s Day event page and retweeting the special message that appears on the page via Twitter.

Each day between March 17-31, one lucky individual will be randomly selected to win the hottest tablet device currently on the market. Winners will be contacted via in-game messages, and those that enter over Twitter will be sent a direct message on the social media site.

Kingdoms of Camelot: Battle for the North works with the iPhone and iPad. Players build their kingdoms online with millions of other gamers, resulting in a multiplayer strategy game experience that is hosted on both Facebook and Kabam.com. Gamers explore majestic Arthurian settings and revel in feature-rich game play options that look to be the next generation of social gaming.

“Kabam is truly leading the next big wave of gaming in hardcore social games,” said a long time player.

Kingdoms of Camelot: Battle for the North is free and available at the iTunes store at

You can see the new iPads on the company’s Facebook page: https://www.facebook.com/KingdomsofCamelotMobile 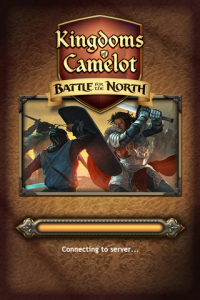 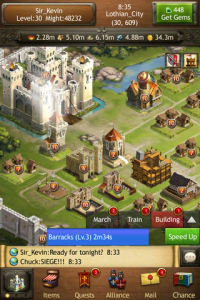