New York, NY -- (SBWIRE) -- 09/16/2013 -- Stopwatches have been around since clock mechanisms were invented. People have always found it useful to measure time, stopping and starting their stopwatches to begin and end the measuring process. There are lots of uses for this functionality, usually involving sports or motorsports in some way. However this certainly isn’t the only field that stopwatches can be used in.

FreeTimeConverter.com, a horological freeware company has recently released a new free stopwatch program for the Windows operating system. It is quickly developing a reputation as one of the best stopwatch programs available.

Traditionally, software based stopwatches have been beset with problems. It might seem like a simple prospect to build a piece of software that measures increments of time, but it is actually a complex programming task. Many software stopwatches have had issues with accuracy. These issues may be minor, only influencing the outcome by a fraction of a second, but with a stopwatch accuracy is key.

The free stopwatch program from FreeTimeConverter.com has been cleverly written to avoid these problems completely. The mechanism of action allows users to measure time down to minute fractions of a second easily and accurately.

The user interface is extremely simple, and is completely self explanatory. Just like a real stopwatch, all of the complexity is behind the scenes. Users simply start the timer, and click to finish it.

A spokesperson for FreeTimeConverter.com said: “There are a lot of free stopwatch applications out there, but on the whole they aren’t very accurate. They certainly aren’t useful in situations where accuracy down to a fraction of a second is important. Our stop watch isn’t just accurate; it also doesn’t use up a huge amount of computational resources. The most accurate stopwatch programs tend to hog memory and processor power disproportionately, in order to maintain extremely high levels of accuracy. We’ve managed to create a free stopwatch program that isn’t just accurate but also has a small memory and processor power footprint, making it suitable to run in the background while you go about other tasks. “ 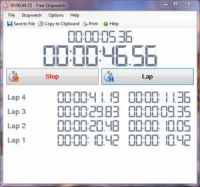