Kalamazoo, MI -- (SBWIRE) -- 11/28/2012 -- Friedrich Consulting & Research, LLC (FCR), a company that is committed to identifying and developing native traits in corn, has just discovered a new source of drought resistance in the crop.

The recent findings, which focused on enhanced seed yield, cold tolerance and drought resistance, were the result of a long-term collaborative effort by FCR along with several seed companies. Prior to this new discovery, FCR had developed a Cold Tolerant (CT) trait that has now been found to also make corn more resistant to drought.

Because this year’s drought had such a significant impact on corn production in the United States, finding ways to improve corn’s ability to withstand harsh environmental conditions is extremely important.

Dr. James W. Friedrich, the president of FCR, said that the recent discovery could lead to a novel type of drought resistance in corn, although additional research is definitely necessary.

“We do not know the mechanism of action,” he said.

“How does this specific cold tolerant trait improve resistance to drought? The whole area is ripe for further research.”

The recent work conducted by FCR has been summarized in a blog titled “Native Traits.” As explained in the blog, native traits are those that are obtained from the natural germplasm pool of a species. Because the original strains of corn were often grown in less than ideal climates and conditions, studying them can give researchers information and clues on cold tolerance and drought resistance that may then be used to help current crops.

As Friedrich explained, the challenge when studying native traits is to identify a source of a target trait that appears to be promising and then efficiently transfer this trait to a modern-day variety of corn.

About Friedrich Consulting & Research, LLC
Friedrich Consulting & Research, LLC is dedicated to improving drought resistance and cold tolerance in corn. The company’s specialty is the utilization of ancestral strains of corn that are adapted to environmental stress. In this effort, the researchers at FCR collaborate with small as well as large companies in the seed/biotechnolgy business. For more information, please visit http://nativetraits.blogspot.com/p/introduction.html 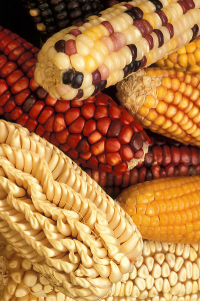