From Behind the Curtain: Compelling Suspense Novel by Sierra Kay Gives Evil a Bold Voice

After the roaring success of her debut novel, ‘Unhinged’, Sierra Kay hits the literary scene with gusto once again as she announces her second major release. Fusing the heartfelt story of a struggling young woman with the gripping pulse of a mysterious murder, ‘From Behind the Curtain’ is poised to resonate with readers around the world.

Chicago, IL -- (SBWIRE) -- 08/14/2013 -- After carving her niche in the world of literature with the debut novel ‘Unhinged’, Sierra Kay is back with another engrossing story that is full of surprises. ‘From Behind the Curtain’ introduces readers to Dee, a heroine who is admirable in her outlook yet fatally flawed in many of her decisions.

With many believing it to be the perfect literary cocktail, readers are expected to flock in droves to dive into Dee’s world for a mystery they’ll never forget.

Dee spent most of her life on welfare, watching her often-absent father struggle with addiction and, lately, watching her mother’s battle with cancer. Dee had paid her dues. When her Auntie M brought her to live in Atlanta, things were supposed to get better.

In Atlanta, Dee had new clothes, a full fridge, and her own bedroom.

However, she soon realized there were other issues. The most important was the apparent overdose of Pastor Clifton, her aunt’s best friend and secret love. Pastor Clifton was trying to clean up the neighborhood.

So how did he end up slumped over his desk—dead? And why, in a church full of gossips, was no one saying a word?

In Dee’s world, that level of power wasn’t unheard of. But here, it was difficult to distinguish the players and, more importantly, who was managing them from behind the curtain.

As the author explains, readers should turn the pages without any preconceptions.

“Nothing is clear-cut and there are certainly no blacks and whites. While there is some clear evil, every character has flaws and these drive the narrative forward at a great pace. They are doing the best they can with what life throws at them,” says Kay.

Continuing, “This is one of the few novels that gives evil a true voice, even if readers have to endure its hunger and thirst for power before they figure out what or who it really is. This curiosity will put each reader at the edge of their seat. I named the book, ‘From Behind the Curtain,’ because one of my favorite movies is The Wiz. In the book, the mother's favorite movie is the Wiz. It's a love that she passed on to her daughter. So From Behind the Curtain is a reference to the Wiz and the fact that you never know what you'll find when you pull back the curtain.”

To date, Kay’s writing has received a consistent string of rave reviews.

For example, Jennifer A. Nordengreen had nothing but praise for Kay’s first novel, commenting, “The author provides the characters & story with much depth. The author takes you through a whirlwind of emotions but leaves the reader feeling thankful. Great read!”

With her latest novel expected to garner similar testimonials, Kay is exciting for what the future holds.

“I’ve got many more books in the works and can’t wait to get them to market. Keep visiting my website for any official news,” she concludes.

‘From Behind the Curtain’ is available now from Amazon, Barnes & Noble and iTunes.

About the Author: Sierra Kay
Author and educator Sierra Kay's love of the written word was predestined. Her mother always encouraged reading. So, she grew up reading classics like Anne of Green Gables and Tale of Two Cities. She also snuck in romance novels that she hid between her mattresses.

Kay has an M.A. in Writing from DePaul University in Chicago and recently won a Nuyorican Poets Cafe Short Story Slam (www.nuyorican.org). Unhinged is Kay's first novel. Her second novel, From Behind the Curtain, will be available Summer 2013. 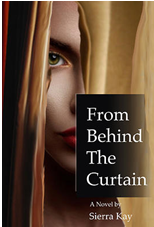