Gary Fortin Seeks $75,000 via Crowdfunding on Indiegogo for the Road to Austin Film Blu-Ray:DVD Release

The film is ready and the world can see how Austin, Texas became the live music capital it is today.

Matawan, NJ -- (SBWIRE) -- 10/03/2014 -- Austin, Texas has become an epicenter in the world of live music where some of the most talented musicians and singers showcase their gifts on a world stage. Road to Austin chronicles how Austin, Texas became the Live Music Capital of the World from its humble origins in 1835 straight through to present day. The film highlights early 1800s Austin, the psychedelic movement, Armadillo World Headquarters, and numerous iconic musical inflection points that shaped the American musical culture of today.

Vintage photos, rare posters, and never-seen-before video footage are presented with a soundtrack that truly inspires and reveals why Austin is such a magical epicenter of music. This is a first-of-its-kind documentary following some of the music industry's biggest stars including Kris Kristofferson, Bonnie Raitt, Delbert McClinton, Eric Johnson, Joe Ely, Ian McLagan, Bob Schneider, Bobby Whitlock & CoCo Carmel and 40 other artists - all led by musical director Stephen Bruton.

To make room for all of this star power in a single film spanning 3.5 hours including the full documentary and interviews along with dozens of songs from the historic "Road To Austin" concert, a 2 disc set was engineered with a planned release of the Blu-Ray and DVD collections in December.

The crowdfunding goal of $75,000 will pay for the publishing and manufacturing costs required to release the film on Blu-ray/DVD. These funds will allow the production team to release the initial pressing of the first 5000 Limited Edition units featuring highly designed packaging and bonus content. The detailed allocation of the funds are as follows:

Once published, all proceeds from the film will be donated to the Stephen Bruton "Artist Wellness Program" to aid in the prevention and early detection of life threatening diseases and to guide participants towards a higher state of ongoing wellness and quality of life.

This crowdfunding campaign ends on November 11, 2014. 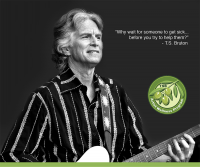 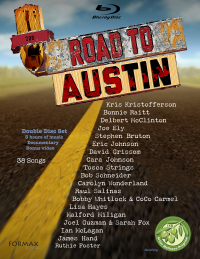