Aiming to cut through the Hip Hop industry’s lack of appreciation for gay artists, Ripparachie is proud to announce a new freestyle mixtape that could be hot competition for the latest release by Lil Wayne. However, what makes Ripparachie’s work so unique is its ultimate aim – to end discrimination and bullying.

Lafayette, IN -- (SBWIRE) -- 11/02/2012 -- Following his own coming out earlier this year, Indiana based rapper, Ripparachie is delighted to announce a new mixtape he dropped on October 31, 2012. However, with a career dedicated to using music as a vehicle to end discrimination and bullying, the mixtape is profoundly different from anything ever released before.

Titled, ‘No iPhone No Thumbs’, the 100% freestyled mixtape aims to prove that being gay should be no bar to possessing the skills and passion to rival any major artist.

“I want people to judge me by my skills as an artist, not by my preference,” says Ripparachie, who is currently in the midst of signing a deal.

He continues, “It appears that the industry does not want to see a gay rapper make it big. My lyrics and themes aim to show people that I can be as hot as any straight rapper and that I deserve the same spotlight. I want to end bullying and discrimination for good.”

‘No iPhone No Thumbs’ consists of freestyles over some of the Hip Hop world’s most popular songs, by articsts such as: Waka Flocka Flames, Lil B, 2 Chainz, Nicki Minaj and Rick Ross.

“People have called me the most slept-on artist in the industry. This is why I have chosen to freestyle and prove my skills in an unconventional way,” he adds.

Fans have been eagerly awaiting the mixtape for many months. With the wait finally over, Ripparachie hopes to please both his followers and the entire LGBT community.

“Talent is talent – and that is what you get when working with me. The fact I am gay should be NO barrier. With the right promotional vehicle, this mixtape could easily outsell something that Lil Wayne could produce. Step aside!” he concludes.

“Frank Ocean might have thought he was the first gay artist, but I been out of the closet rapping and representing the LGBT community” He adds.

The mixtape can be found here: http://www.hotnewhiphop.com/that-fag-ripparachie-no-iphone-no-thumbs-mixtape.66909.html

More information about Ripparachie can be found on his official website: http://www.ripparachie.com/

About Ripparachie
Ripparachie has been doing music ever since he was young. His first song was written for him by his cousin when he was 7 years old.

He started writing his own music when he was 11 years old. He was born and raised in a small town called Lafayette in Indiana. He first started calling himself "Lil Rippa" when his grandmother died.

When he moved to Bridge Way, a local apartment complex, his big bro always called him "Rachie". He decided to put both names together and that’s how the name "Ripparachie" was created. Ripparachie opened up for Too $hort when he was 14 years old. He has also opened up for Crime Mob, Lil Wyte, DJ Unk, and more.

He has been dropping solo mixtapes ever since he was 15 years old. He created #TeamWerk in the year of 2011 and the movement is getting bigger and stronger everyday. Ripparachie is not afraid to be different and he feels that being unique is his key into "the game". He has done songs in almost every genre and will continue to explore. One of his goals is to create his own genre of music. Another one of his goals is to REVIVE "swag" music. 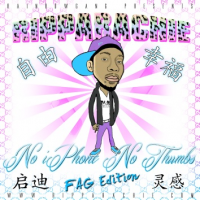