Salt Lake City, UT -- (SBWIRE) -- 08/18/2015 -- GeorgeLife, also known under the moniker of gLife, is preparing to release his sophomore studio album, 'One-Five.' The album follows 'All I Know,' his highly successful debut record that charted on both indie and college radio. Since stepping out into the music community, gLife has toured extensively throughout the United States and Canada. In promotion of 'One-Five' and its release on September 15?, gLife is making the rounds once again with additional U.S tour dates. He's backed by DJ Pookie and violinist Master Qball, thus refining the definitive hip hop trio.

In 2013, the Salt Lake native's music became synonymous with quality production, excellent guest features,and passionate delivery. The twenty track epic defined his debut on the scene, marking him a relevant and poignant artist for his generation.'One-Five' elevates gLife's output even further, delving into political and social issues, as is the case with the single for the album, 'Dangerous,' which dropped with a music video at the beginning of July.

'Dangerous' features Master Qball on violin and is controversially, but superbly portrayed on film in a video directed by Evan Moore. The video, which has already picked up modest traction online, tunes into the chaos and frustration regarding the police and minorities the past year. Immediately referencing cases such as Michael Brown's, the music video turns the tables on the cop and reflects on gun violence and recent American politics. Though controversial, the video harnesses a very crucial dilemma in our society.

Like its predecessor, 'One-Five' is chock-full of incredible guest artists. Los Angeles heavy hitters such as Percee P and Living Legends alumni, Sunspot Jonz, are present. Hailing from the east coast, Reef the Lost Cauze (Army of the Pharaohs) and Adlib (Battleaxe Warriors) provide powerful performances as well. Also following in the footsteps of 'All I Know,' the album is is predicted to land itself another Top 5 ranking on the CMJ charts.

As aforementioned, 'One-Five' will be available globally on September 15. The album will be released digitally worldwide, both on retail platforms such as iTunes and Amazon and streaming services such as Spotify. Global presale for the record begins tomorrow, August 18. The live tour in support of the album begins August 21 in Utah and ends October 25 in Chicago. (See dates below.) The tour is set with performances from the likes of Nappy Roots, Manchild, Bubba Sparxx, Yin Yang Twins, and Adlib.

Connect with gLife on social networking and below and check out the shows to support gLife live. More so, 'Dangerous' is available via its music video now! 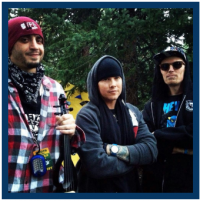