Get Ready for Some "Wilding Buggin' Trippin'" from Theholyc

Seattle, WA -- (SBWIRE) -- 06/19/2014 -- Theholyc is most famous as a leading DJ in UK and is ranked no.3 out of the top 50 emerging artists this year. This was published by none other than Time Out New York. Theholyc is an underground white female Scottish rapper and is known for giving her fans some of the best party music tracks of all times. This talented rapper has toured many countries including Australia, the UK and the US. And she is reported to have returned from an extremely long trip in New York. She had attended a lot of events during her tour in the US. Theholyc had a private party with Jay-Z at his 40/40 club which is the most luxurious clubs ever known. Jay-Z is a famous American Rapper, record producer, entrepreneur and is most famous as a hip hop mogul.

Theholyc also spent her time hanging out in P Diddy’s studios. P Diddy is yet another versatile rapper, record producer, men’s fashion designer and record producer. She also attended the Hip Hop Awards downtown Manhattan and spent some time with various celebrity rappers backstage. She ended her creative trip with the track featuring Chris Brown’s artists Luvaboy TJ known as “Wilding, bugging, trippin”. Luvaboy TJ hails from Harlem New York and is known to have a great combination of comedy, flow and swag in his hip hop music. And this combination of Luvaboy TJ and Theholyc is definitely going to be a great surprise for music lovers.

The video of this music track has been officially launched on Theholyc’s VEVO video channel and on the official website theholyc.com and fans can also view this video at http://youtu.be/z87BvVU7Jpc. It has not been an easy journey for Theholyc. She came across a variety of challenges and is still battling them in the hip hop world. One of the main challenges comes from Theholyc being a white female gay. However, she is blessed to have had the support of many people in the industry including Le 1f, a New York artist, rapper and is above all an openly gay black male who broke down all the barriers most common in the so called Rapgame.

About http://www.theholyc.com
Theholyc, www.theholyc.com is a site where music lovers and theholyc fans can find latest information, blogs, music videos, premiers and many more on this site. 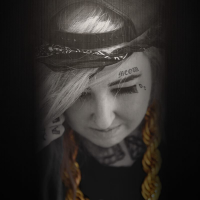