Giving Warriors - The Podcast with Heart to Transform the World

Prepare to hear a message so inspiring, yet so simple, your heart will skip a beat

Accessible through iTunes, Stitcher and the GivingWarriors.com website, the 45-minute to an hour program will be hosted by Giving Warriors founder Dominique Silverman as she highlights today’s most inspiring stories about leaders in the non-profit and profit worlds striving to create change in the world through collaboration, leadership and empowerment.

The show will feature charities, non-profits and foundations, as well as social enterprisers and authors. During the casts, listeners will have the chance to win prizes from Amazon gift cards to iPads and more.

Some show highlights include:

- Carlton Wilborn, the former Madonna lead dancer, whose Danceformation is igniting freedom, courage and healing for everything from weight loss to low self-esteem to domestic violence on a global scale.

- Warren Te Brugge, whose My Arms Wide Open Foundation works with mothers, children and youth in South Africa to build sustainable communities and responsible businesses and also re-engages fathers in the family unit.

- Gary Miller, founder of Rock Against Human Trafficking (R.A.T), is a 501c3 corporation using power of music to promote awareness and critical resources in fighting against human trafficking. R.A.T’s first project “Set Them Free” is a compilation album of Grammy-award winning stars and Rock &Roll legends such as (Slash, Fergie, Hearts, Andy Frazers, EnVoge…) which got huge media attention performing the music of Sting and Police.

Silverman herself was born in Vietnam, where her father was sent to a re-education camp for fighting for the South Vietnamese, forcing her sisters and she to work and beg at a young age. When he returned, they moved to the United States, where Silverman went to college, immersed herself in real estate and, then, became executive director of the Senhoa Foundation.

During college, she began her work with Affinity Neighborhoods, working in communities in Southern California to rehabilitate homes to improve the value of the neighborhoods and it was there that she saw the power of collaboration and engagement.

Through the podcast and online forums, Giving Warriors hope to inspire all to examine their lives to be compassionate in life through routine interactions and through leveraging our specific talents and gifts whether an established organization, a foundation wanting to grow, or an individual wanting to contribute.

About Giving Warriors Podcast Series
Giving Warriors connects individuals, communities, non-profit and for-profit entities to build and sustain a prosperous global society through a forum of engagement, participation and innovation. 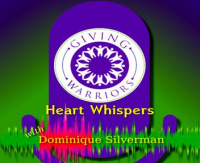