God Is Not Dead: Man's Pursuit of Faith in Judaism: New Book Empowers Jews with Actionable System of Growth in Faith

Masterfully crafted by a Russian-born rabbi and scientist Moshe Finkelman, “God Is Not Dead: Man's Pursuit of Faith in Judaism” fuses the author’s personal and scholarly experiences to offer Jews an opportunity to grow in faith and to ultimately create a bond with God. Outlining a powerful blueprint with actionable steps, Finkelman’s system of growth in faith is the first of its kind in almost three hundred years.

Brooklyn, NY -- (SBWIRE) -- 05/14/2014 -- While the main emphasis in the Jewish religion is on the lifestyle, growth in faith is often disregarded. Dr. Moshe Finkelman maintains that faith itself is a program of action for each and every Jew. It is to be acquired and further developed. However, growing in one’s faith is less than easy without direction or an “action plan”. In the eighteenth century Rabbi Moshe Hayim Luzzatto, Ramhal gave the world this guidance with his epic volume “The Path of the Upright”, and now Dr. Finkelman gives the modern-day Jew a contemporary plan with his compelling new book.

“God Is Not Dead: Man's Pursuit of Faith in Judaism” examines the art of acquiring and developing true faith and it’s based on the author’s own religious journey that had begun in Russia, fused with his diligent scholarly work. The result is a book that has been years in the making; a work that can help any Jew transition from the initial level of faith to the ultimate level of drawing near God.

Synopsis:
A scholar and a thinker, Dr. Moshe Finkelman emerges as an expert on Jewish faith in his book “God Is Not Dead: Man’s Pursuit of Faith in Judaism.” For the first time since the eighteenth-century’s The “Path of the Upright” of Rabbi Moshe Hayim Luzzatto, there is a book that describes a system of growth in faith, from the initial level to the ultimate level of knowledge of God, leading to closeness to God. Dr. Finkelman gradually and convincingly takes the reader through steps of growth in faith, leaving no argument unsettled and no subject unexplained.

“God Is Not Dead: Man’s Pursuit of Faith in Judaism” conveys messages that resonate with the worldview of a contemporary believer. Finkelman’s system of growth in faith gives anyone the ability to create a bond with God. It offers Jews of every level of commitment a clear and accessible path to deepen his or her faith, and to do so by mastering it as the art form that it truly is. Presented as an easy-to-grasp actionable process, this system of growth in faith was inspired by the author’s personal religious evolution.

Dr. Moshe Finkleman, who practiced Judaism in Russia in the underground, draws mainly from religious and philosophical sources of Judaism, including the teachings of the twelfth-century Jewish philosopher Maimonides, the principles of the eighteenth-century scholar Rabbi Moshe Hayim Luzzatto, and the beliefs of Yeshayahu Leibowitz, the twentieth-century Israeli intellectual, a leading authority on Jewish faith. The work is further enlivened with anecdotes about both historic figures and everyday people alike. Providing a compelling, achievable blueprint for growth in faith, this fascinating work serves as a timely, essential contribution to contemporary Judaism.

“I didn’t write this book to replace the work of scholars like Rabbi Moshe Hayim Luzzatto, but rather to complement their teachings and bring them up to speed for the contemporary Judaism,” says Dr. Finkelman, a rabbi and scientist. “Jewish faith requires development and continuous pursuit to prevent it from fading away. This book offers Jews of every level of commitment a clear and accessible path to deepen their faith. Engaging in the process of growth in faith makes the lives of the Jews meaningful as human beings.”

‘God Is Not Dead: Man's Pursuit of Faith in Judaism’ is available now: http://amzn.to/1oL23De.

About Dr. Moshe Finkelman
Dr. Moshe Finkelman is a man whose diverse and fascinating journey through life imbued him with the unique perspectives of both a religious thinker and a scientist. He studied medicine in Russia, and after making aliyah, served in the Israeli Army and fought in the first Lebanon War. Dr. Finkelman received his scientific training at the Medical School of Hebrew University in Jerusalem and then founded and headed the Jerusalem-based Institute for Research and Treatment of Infertility according to the Jewish law. Trained in both kiruv and religious leadership, Dr. Finkleman’s spiritual undertakings include two decades of speaking on Jewish faith in Israel and in the United States and serving as a rabbi and a communal leader. As a scientist, Dr. Finkelman has established a successful career in clinical research and drug development and lives with his wife Anna in Phoenix, Arizona. 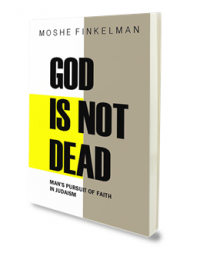