Grammy-Nominated Artist Jay Rodriguez Speak with Dr. Leanh Nguyen About the Meaning of Making Music in His Life

Dr. Leanh Nguyen, psychologist and the host of "On Living: The Trauma and Beauty of Being Human" on VoiceAmerica, interviews Jay Rodriguez, composer, saxophonist and flautist, on the interplay between making music and living life. They will speak about what music has taught him about living, and how making music has helped him be human.

Phoenix, AZ -- (SBWIRE) -- 06/25/2018 -- On VoiceAmerica this Thursday 6/21, Jay Rodriguez will join Dr. Leanh Nguyen in a discussion of the role of music in his project of living fully, on her show "On Living: The Trauma and Beauty of Being Human."

Through a series of intimate, thought-provoking conversations, the show's host offers a chance to reflect on questions about survival, fulfillment, connection, and being human. What does it mean to be human? What do we make of this life? How do we stay fully alive to our humanity? How do we find the means to behold beauty and stay in wonderment? How do we live fully and be fully human?

Dr. Nguyen brings 25 years of engagement with people from all walks of life, survivors of war and trauma, immigrants from all over the world. This show is an opportunity to explore the meaning of being alive and to support people in the project of living fully.

About Leanh Nguyen Ph.D.
Born and raised during the Vietnam war, Dr. Leanh Nguyen has dedicated herself to the mission of helping people hold on to their humanity and reclaim the inherent right to live their fullest, truest self. She has dedicated herself to those whose lives have derailed by adversity and trauma. She has worked in the poorest areas of NYC but has also consulted for prestigious law firms and international agencies. Her presence has made an impact on victims of war in Africa or the Middle East as well as in Federal Immigration courts for asylum seekers and illegal immigrants.

Her practice is open to people from all over the world, across spheres and cultures, ages and sexual orientation. Her calling is to support people to be their most human and live life to the fullest. With this show, as in her work, she invites the audience to find the question and passion that drive our time on this Earth.

About Jay Rodriguez
Jay Rodriguez is a Grammy-nominated saxophonist, flautist, clarinetist, composer, producer and arranger. His resume is a who's who of the music world, placing him in the company of Elvis Costello, Natalie Cole, Celia Cruz, Melissa Manchester Miles Davis, and Prince, to name a few.

He has lectured all over the world, including Denmark, Germany, Japan, Egypt, and Mexico.

His most recent album was "Your Sound" released in February 2018. It was recorded live from Lincoln Center, featuring jazz legends Billy Harper and Larry Willis along with Billy Martin on Percussion, JT Lewis on Drums and Eric Wheeler on Bass

The New Yorker warned that "sometimes the sound is explosive. wild and full of fury, other times it aches with a passion that is painful and bare." 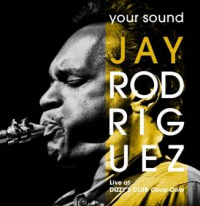