Gripping Political Thriller That Pulls No Punches: Kimberly Shursen's New Novel Chronicles a Desperate - and Deadly - Struggle for the Truth

A powerful Boston mayor, a step-daughter hiding a dark secret and a Boston Globe reporter willing to risk everything for the truth – Shursen’s ‘Itsy Bitsy Spider’ is an edgy, powerful page-turner guaranteed to wow fans

Des Moines, IA -- (SBWIRE) -- 04/10/2013 -- While celebrities and politicians are often under the media’s microscope, their wealth and privilege allows them to carry many of their darkest secrets to the grave. Those in power have one goal: maintaining a squeaky clean image – whatever it takes. This irresistible concept is the heart of a spellbinding new novel by Kimberly Shursen.

‘Itsy Bitsy Spider’ is more than just a novel; it’s a could-be-ripped-from-the-headlines tale that provides a chilling and stirring reminder of the real-life secrets that thousands in power work hard to hide from those closest to them.

Claire McCallin's life is about to spiral out of control.

Step-daughter of the powerful Boston Mayor Jack McCallin, Claire's breath is taken away when she hears her three-year-old daughter singing "Itsy Bitsy Spider," the song that will haunt Claire the rest of her life.

After Christenson helps Claire escape McCallin’s Belmont mansion, with the mayor’s hired killers hot on their trail, Matt and Claire leave a trail of murders behind them.

Desperate to find the evidence to prove the wealthy mayor is not who he says he is, McCallin wants Claire and Christenson silenced before his empire comes tumbling down.

Shursen’s narrative explores the often painful reality that human beings – no matter how wealthy – cannot escape their own frailties.

“The rich and famous share the same problems us as, even if their ability and resources to hide them are greater. I wanted my book to display the deep-rooted fear and effort than one man in power will use to ensure his darkest secrets are never revealed. It really makes you wonder how many other wealthy people go to the grave with secrets that would change our opinion of them forever,” says Shursen, a renowned playwright.

Continuing: “Yet, in a corrupt world – there are often lights in the darkness. In spite of the fact Claire McCallin has been told that if she ever tells the secret, bad things will happen, in spite of the fact the only other person she told disappeared, she is the only one who can protect her daughter.”

With such an enthralling concept, the book is capturing the attention and praise of readers around the world.

“’Itsy Bitsy Spider’ pulls no punches. The gripping story line grabs you from page one and takes you on an epic ride through family secrets, political corruption and the bounds of a mother's love,” says Katie French, author of “The Breeders’ and ‘Nessa: A Breeder’s Story.’

Randy Mixter; author of ‘Sarah of the Moon’ and ‘Swan Loch’ was equally as impressed, saying, ‘Itsy Bitsy Spider’ is an excellent suspense thriller that grabbed me at the first page and held me tightly in its grip until the highly satisfying conclusion. The novel is a well-written page turner and I highly recommend it."

With its many murderous, edgy and surprising twists, Shursen’s latest addition to the political thriller genre is set to become a smash hit.

More information can also be sourced from the author’s official website: http://www.kimberlyshursen.com

About the Author: Kimberly Shursen
Kimberly Shursen’s ‘Itsy Bitsy Spider’ is her debut novel. A BA in education and a background in corporate marketing, Shursen’s novel ‘Hush,’ a shocking courtroom drama that will revisit the infamous Roe vs. Wade case, is due to be released later this year. 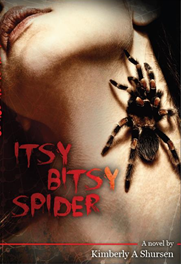