Gritty New Series Takes a Bite out of Vampire Genre

From author C.M. Michaels, ‘Dangerous Waters’ kicks off the “Sisters in Blood” trilogy, an edgy urban fantasy series. Telling the tale of a not-so-typical college freshman whose destiny may well impact all of mankind, fans are already buzzing about the complex relationships, multifaceted characters and steamy romances. Not to mention, a rich new mythical world that readers are ‘dying’ to explore.

Louisville, KY -- (SBWIRE) -- 01/16/2014 -- It isn’t easy bringing something fresh and exciting to a genre that’s seen the likes of Twilight, Vampire Academy, House of Night and Black Dagger Brotherhood, but author C.M. Michaels is up to the challenge.

With the debut of Michaels’ series, ‘Sisters in Blood’ and its first novel, ‘Dangerous Waters’, the author is creating quite a ‘bloody’ stir amongst readers who prefer their books with fangs.

“The reviews have been encouraging,” says Michaels. “With these books, and with my protagonist, Emily, I wanted to appeal to a wide variety of genres, including mystery / suspense, urban fantasy, paranormal romance and, of course, anyone who appreciates a good vampire novel. My readers will discover that I don’t mind getting a little dark, and I’m not afraid to take my characters to unexpected places. It makes for thrilling writing, and hopefully thrilling reading, too.”

For Emily Waters, a nature-loving, small-town girl with an overprotective father, heading off to Boston University to study conservation biology is a dream come true—until a chance encounter catapults her into a mythical world she'd do anything to escape.

The latest victim in a rash of abductions near campus, Emily is brutally attacked before being rescued by a powerful new friend. She survives the ordeal, only to find herself held captive and presented with an impossible choice. While preparing for the unimaginable life she must now embrace, clues soon emerge that Emily may not be entirely human, and her physical transformation awakens goddess-like powers that her new family cannot begin to explain.

Dealing with her human first love, the not-so-platonic relationship with her coven "sister," and her new vampire sort-of-boyfriend further complicates matters, not to mention being secretly hunted by the psychopaths who attacked her. And as the only known offspring of a once all-powerful race, the climactic battle is just the beginning of her journey.

Michaels took a risk while writing the novel, breaking away from some of the stereotypes of the genre to take his characters down a grittier, less traveled path.

“The story takes you inside a coven of female vampires, letting you get to know each of them intimately rather than just focusing on the protagonist and her love interests. And unlike a lot of the books in the vampire genre, there is no popping open a can of O- or feeding on animals. People die. The challenge I took on as an author is to make the reader fall in love with my characters in spite of what they must do to survive. There are magical elements that come into play, and events that unfold that none of the main characters can explain, which is a fresh change of pace from the ‘supernatural creatures educate the human protagonist’ mold. The world I’ve created is very raw and nothing is black and white,” says Michaels.

Continuing, “At its heart, ‘Dangerous Waters’ is a story of self discovery, overcoming challenges, and embracing the fact that life can take us in totally unexpected directions. We all have hidden abilities inside of us that will never surface if we are too afraid to explore and try new things.”

Since its release, the book has earned glowing reviews:

"One of the best opening chapters I have read in a long time", "Kudos to Michaels for jarring me out of my expectations", "If I ever get the choice to become a vampire, I want her (Emily's) abilities", "I'll be keeping an eye out for when he releases the second in the series." Four fangs out of five - I Love Vampire Novels

"Dangerous Waters keeps the plot moving at a brisk pace. The story introduces themes and ideas of its own, capturing the essence of the genre with a fun and energetic take", "The lore and plot of Dangerous Waters are enjoyable, thoughtful, and imaginative", "The foreshadowing of the prologue as well as the spicy potential of multiple love interests manages to carry the reader's curiosity beyond the end of the first book. Readers who enjoy popular urban vampire novels such as Twilight will likely find this book an interesting beginning to a fun and engaging series." - Fantascize.com

"Michaels will gain many new fans with this incredible launch of the Sisters in Blood series. Thoroughly entertaining, gripping and enchanting from start to finish, Dangerous Waters will appeal to fans of Twilight and mythical worlds, and vampire groupies everywhere. The characters seem to come to life with every flick of the page in Michaels' fast-moving urban fantasy/new adult hybrid. 4 Stars." - RT Book Reviews

‘Dangerous Waters’, published by Freya’s Bower, is available now in both paperback and Kindle formats: http://amzn.to/1eQAZNE

About C.M Michaels
C.M Michaels grew up in a small town in northern Michigan as the youngest child of a close-knit family of seven. He met his wife, Teresa, while attending Saginaw Valley State University. Together they've provided a loving home for several four-legged "kids", including Sophie, their eternally young at heart, hopelessly spoiled Spaniel.
He has always enjoyed writing, and still has fond memories of reading his first book, a children's novella, to local grade schools when he was 14. C.M. is currently working on the second book in the Sisters in Blood series along with Kerrigan’s Race, the first book in his new fantasy romance series called The Syreni.
When he's not writing, C.M. can be found curled up with a good book, watching movies or hitting the hiking trails with his wife. An avid reader since discovering Jim Kjelgaard novels in early childhood, his favorite authors include Kelley Armstrong, Peter V. Brett, Richelle Mead, Rachel Caine, Cassandra Claire, J.R. Ward, Laini Taylor and Tessa Dawn.
C.M. currently resides in Louisville, Kentucky. 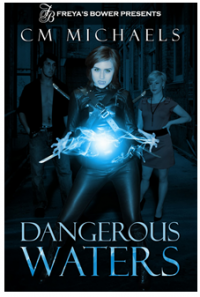