New York, NY -- (SBWIRE) -- 03/04/2014 -- For the first time in history an internationally recognized CEO is taking an unprecedented stand to expose the corruption in the ISO certification process. Daryl Guberman, president of Guberman-PMC, a quality and manufacturing consulting firm in Connecticut is believed to be the first in U.S. history to reveal a multi-billion dollar industry scam in a tell-all campaign that has been dubbed the 'Shock and Awe of the Quality Community'.

From what began as a noble idea to improve quality within companies across the globe, ISO 9001 has been exploited, abused, monopolized, and perhaps just about turned into the largest rip-off in industrial history, according to Guberman. Having been involved with ISO standards since 1987, Guberman, an internationally recognized quality consultant, has watched the nation's quality assurance sector decay rapidly due to commonly practiced lies, deceit, organized corruption, fabricated myths, overly zealous marketing tricks, and personal character attacks often performed by consultants, auditors, registrars and even accreditation bodies.

Guberman said, "Companies involved in critical processes such as aerospace and medical need to be aware that most quality systems are audited and consulted by individuals with little or no engineering background or any real-world business or quality management skills whatsoever.” He added, "No wonder so many ISO certified businesses feel they have wasted their hard earned money on an over-engineered certification program and got nothing in return but a large bill owing thousands of dollars."

Guberman warned there is a well-guarded industry secret behind the entire ISO certification program. The fact is, according to Guberman registrars want to keep the certification process complicated to increase their profits. In reality, the process can and should be simplified to assure a more affordable certification for all companies., said Guberman.

On the G-PMC, LLC company website a reference of a direct quote from the American National Accreditation Board (ANAB®) website (http://www.anab.org/accreditation.aspx) states the following: “Is Your Certificate Accredited? If your certificate was issued by an ANAB® accredited certification body (CB), the answer to this question is probably yes.” Guberman asked, “What does ANAB® mean by 'probably accredited? He explained, “Probably guarantees nothing, the American National Accreditation Board (ANAB®) has the audacity to answer this ever so critical question about accreditation by confirming that certainty is impossible in this regard because the best they can offer as a so-called accreditation body is “probably,” that is an insult to all companies ISO certified by ANAB® accredited registrars and their customers.”

Guberman elaborated further, “Let us run this through once again, here is a national accreditation body attempting to reassure their clients and potential clients about accreditation by their own approved certification bodies (Registrars), and the best that they can pledge in confidence is 'probably', it's downright appalling.”

Guberman said ANAB® takes upon themselves the authority to determine accreditation, and in so doing, they cover themselves by using an escape clause with the word 'probably'. “Ironically, ANAB® itself by saying 'probably' appears to be misrepresenting itself to the world and to the certification of many companies, and by so doing exacerbating – quality failures such as “Chinese suspect parts “migrating into military aircraft.” says Guberman.

An article on Guberman's website states; the companies who have ANAB® associated certifications are companies that are questionable with which to do business because one does not know with certainty if their accreditation is valid or not, which can be inferred from an archived page of its own (ANAB®) declaration at http://web.archive.org/web/20050210114349/http://www.anab.org/HTMLFiles/cb_claims.htm

Guberman concluded,“ANAB® would refer non-ANAB® affiliated certification bodies to The International Accreditation Federation (IAF) and inform such organizations if it's not recognized by ANAB®, then it's not official.” He explained, “Would this be 'probably' not official? The Vice President of ANAB® sits as the President of IAF which claims to be the rule makers, and therefore, because of this, ANAB® is probably official along with the other sub tier organizations that are affiliated with them.”

Guberman said, “In the quality arena utilizing the term 'official' is nothing but a weasel-like method to imply an authority that is not there. It is akin to saying, 'Ask my friend if I’m a thief.' “Under these peculiar circumstances, the IAF is actually more a ceremonial organization than an official organization. In fact, if one was to substitute the word 'ceremonial' for the word 'official' in the language of ANAB®, that would perhaps be closer to the truth.”

Case in point, said Guberman, "Has anybody ever witnessed a certification being revoked by a registrar? Of course not, they simply don't do it because they'll lose money -- the customer will just go to another registrar. The same goes for corrective actions, even if justified; all it really comes down to is money. You have the money, you get the certificate, it's that simple.”

Guberman has been exposing to the quality community over the last three years what he calls the 'accreditation myth.' Guberman warns companies to be aware of consultants and registrars that use the accreditation scheme to acquire business from competitors. According to Guberman, the flimflam is based on scaring companies into believing their certification will not be valid if not accredited by a certain accreditation body (ANAB®). Guberman calls it a devious tactic performed regularly by consultants and registrars to unfairly acquire business from a competitor, which prefers by choice, to not be ANAB® accredited. Guberman said across the nation and worldwide thousands of companies every day become victims of the accreditation myth, and it's costing these businesses millions of dollars in wasted revenue.

Guberman said, in most countries (including the United States), accreditation is a choice, not an obligation and the fact that a certification body is not accredited does not, by itself, mean that it is not a reputable organization. He explained, a certification body operating nationally in a highly specific sector might enjoy such a good reputation that it does not feel there is any advantage for it to go to the expense of being accredited. This having been said, many certification bodies choose to seek accreditation, even when it is not compulsory, in order to be able to demonstrate an independent confirmation of their competence (according to International Standards Organization) Source: http://www.iso.org/iso/home/standards/certification.htm

What puzzles Guberman is despite his honest efforts of warning companies about the accreditation myth, corruption and monopolizing in ISO, many companies ignore the warnings and it's costing them thousands of dollars in lost revenue. He concluded, by quoting Thomas Paine: "Reason obeys itself; and ignorance submits to whatever is dictated to it." - Thomas Paine

For the original version of this news article visit: http://www.g-pmc.com/guberman-pmc-unveils-the-corruption-in-iso-certification-pricing-and-the-myth-of-anab-accreditation/ 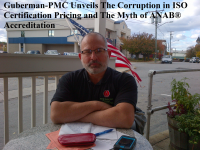