Halloween Songs That Horror Fans Would Like to See Remixed

Paul Ramos of Disciple Brothers Productions prepares to reboot and remix the horrifying holiday with a collection of new music.

Los Angeles, CA -- (SBWIRE) -- 10/10/2012 -- What music comes to mind when you think of Halloween music? Most likely it’s either Michael Jackson’s smash “Thriller” or the newest version of “The Monster Mash.” Now shift gears to Christmas and Christmas songs. Ask 10 people what song they think of at Christmas and you’ll get 10 different answers. Paul Ramos, founder of Halloween Music Lives, wonders why the general public can’t get past these two songs for what has to be the most creative holiday of the year.

“Creativity is what Halloween is all about. It doesn’t matter how young or how old you are. If you go out during the Halloween season, you are going to be using your imagination to be someone, or something, other than what you really are,” he said.

He pointed to the aisles in department stores, which are packed with costumes ranging from the supernaturally scary traditions like Frankenstein monsters and vampires, to fairies, superheroes and cartoon characters.

“When it comes right down to using our imagination and taking flights of fancy, Halloween wins hands down. Now when we seek a brief escape, resurrecting a memory or finding something that engages us on many levels, we look to music,” he said. “I believe there is a way to combine these two things.”

Mr. Ramos encourages musicians to make their own scary music and list it on his site HalloweenMusicLives.com which is dedicated to providing great danceable music for the month of October when all the ghouls, goblins, vampires, monsters and the living dead throw parties. The growing collection of tunes there are all Halloween-inspired.

“With the sheer amount of musical talent and musicians in the world today, someone can come up with some new Halloween music. It doesn’t have to be scary and talk about monsters. Just be creative with it,” he said. Ramos also encourages people interested in Halloween music to visit the site and support the independent artists who market their work through the website. Halloween Music Lives also encourages remixes of the classics but only with copyright permission.

So let’s use our imagination. The Halloween Music Lives website is divided into 12 categories of music. Here is a list of popular artists we’d like to hear drop a Halloween remix: - Hip Hop: “Psycho Killer” by Jay-Z

This Talking Heads song is almost as terrifying as the robotic dance David Byrne does right before he starts singing. Jay-Z has been called the most talented Hip Hop artist alive so we think he’s up for the task. Hey, we didn't’ say it would be easy.

It's hard to think of the Eagles' song as a rap joint, but Eminem knows all about women and addiction and can deliver this remix with heart. "Witchy Woman" hit No. 9 on the Billboard Hot 100 in 1972.

- Rock: “I’m Your Boogieman” by The White Stripes

White Zombie remade this K.C. and the Sunshine Band classic. Add The White Stripes to the remix and "boogieman" has a scary new connotation.

Ok, it’s finally time for this remake. This Michael Jackson hit is the most downloaded Halloween song of all time. Legendary blues guitarist Lurie Bell's top selling album, The Devil Ain't Got No Music can prove the title wrong with this remix.

- Country: “Runnin’ With the Devil” by The Charlie Daniels Band

Chilling lyrics about living wild was a hit for Van Halen. The Charlie Daniels band would do well to follow up their song “Devil Went Down to Georgia” with a remix of this classic. Can’t wait to hear the violin riff on 2.0.

- Alternative: “Nightmare on My Street” by Smashing Pumpkins

This original song was so successful that the producers Nightmare On Elm Street sued singer Will Smith for copyright infringement. Halloween Music Lives will only accept completely cleared remixes so don’t even think about it if you don’t have the rights! Smashing Pumpkins can afford it.

- Jazz: “Bark at the Moon” by The Yellowjackets

A list like this would not be complete without the contribution of Ozzy Osbourne. Ozzy is probably most famous for being the lead singer of Black Sabbath and star of his own reality show. The Yellowjackets, a fusion jazz band, would give this song an eerily soft touch.

Every party needs a group dancing song. "The Time Warp," from the original Rocky Horror Picture Show, is easy to follow and ready for a Carl Cox reboot.

This is the theme song from the incredibly successful movie Ghostbusters. Ray Parker, Jr. wrote the song and Benny Benassi will be sure to keep the infrared lights going for all the ghost hunters in the house.

- Electronica: “Somebody’s Watching Me” by Rockwell

This slightly paranoid debut hit from Rockwell could do with a scarier remix. His song went to #2 on the charts with the help of Michael Jackson in the background. Rockwell is the son of Motown Records executive Berry Gordy, Jr. so who better to do the remix than Rockwell himself?

Every Halloween we listen to Oingo Boing's " Dead Man's Party" and if this doesn't get your Halloween party rocking, nothing will. John Digweed has been DJ-ing for clubs since he was 15 years old and can handle this epic remix.

- Dub: “Highway to Hell” by Skream

If you think you can manage your own legal versions of the above or have some other creepy song to contribute, visit http://www.whatishalloween.tv and submit your music. We’ve got chills just thinking about the possibilities.

About Halloween Music Lives
Halloween Music Lives is dedicated to providing danceable music for the month of October when all the ghouls, goblins, vampires, monsters and the living dead throw Halloween parties. HML encompass all aspects of music from Hip Hop to Country to World music. 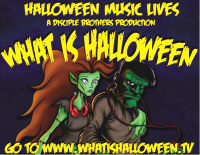