Paris, France -- (SBWIRE) -- 05/10/2013 -- With over one hundred million users, Google Plus has staked its place as a dominant force in the world of online networking. One of the network’s most popular features is its live video ‘Hangouts’; used for both real-time video chat and online conferencing by thousands of organizations, education institutions and even as a Q&A platform for President Barack Obama.

While innovative in its own right, Google plus users can now take their Hangouts experience to the next level, thanks to a new free online graphics creator from France’s YMB Properties.

HangoutMagix allows anyone to create broadcast-quality lower-third graphics that will enhance both personal and professional Google Hangouts/Hangouts on Air sessions. With the ability to create news anchor-style straplines and name titles in under one minute, the tool has already been utilized by thousands of Google Plus users since its May 4th launch.

“Google Hangouts is a phenomenon taking the web by storm. The only problem is that, until now, there was no easy way to create professional lower-third graphics that made you look like a TV anchor,” says Bertrand Diouly Osso, a French technology expert and creator of HangoutMagix.

Continuing, “HangoutMagix allows anyone to have a professional appearance on their Hangouts. My mission is to make these high-level graphics accessible to everyone and 100% free.”

Creating a graphic within the Google Plus interface is simple; users first visit the HangoutMagix website and select a style, a right-hand logo and finally edit the graphic’s text to reflect their chosen message. For further customization, user-owned graphics can be uploaded with a single click. The graphic is then generated and transmitted directly to their hangout’s live feed.

One of the early adopters of HangoutMagix is Guy Kawasaki, former Apple Evangelist and a prominent figure in the startup world. On his personal Google Plus page he sent a post about Hangout Magix on the next day after its release: “Want to jazz up your Hangouts? This site by Bertrand enables you to create a custom overlay”, Kawasaki noted.

“This really does break new ground, especially for professionals who want to use the Hangouts system while retaining company branding and staying true to their professional corporate image. The fact that it is free also makes it accessible to organizations of any kind,” Bertrand adds.

With the tool’s Beta testing well underway, Google Plus users from across the globe are invited to visit the HangoutMagix website and get creating today: http://hangoutmagix.com/

About YMB Properties
YMB Properties is an internet company which holds a diverse portofolio of website properties. Our passion lies in developing gorgeous graphic softwares and insightful training courses for online business owners. 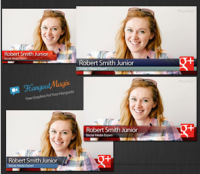