The comedic crime novel takes readers on a journey to steal a vanload of counterfeit Viagra, where all doesn’t go to plan. Fast-paced and funny, ‘Hard Stop’ bulges with sharp dialogue and wry commentary, resulting in rising sales and a swelling fan base for this new author.

Glenmoore, PA -- (SBWIRE) -- 09/24/2012 -- For Declan Davies, his first foray into the world of fiction has produced a unique and compelling story. In fact, ‘Hard Stop’ is quite unlike anything written before.

Described as a ‘comic romp’, the novel takes a lighter look at the demise of the suburban American dream, with a plotline that is guaranteed to stick out from the normal offering of cops-and-bad-guys fiction.

After two recently laid-off suburban dads decide to steal a vanload of counterfeit Viagra from a mob-connected businessman, their easy-money plan gets a whole lot harder. Hard Stop is a comic crime novel set amid a soft housing market and a flaccid economy, where desperate times lead to bad behavior — and the stiffest of penalties.

Jim Metz was pharmaceutical salesman of the year, but now he’s partnered with his shady neighbor Dave Malley in a desperate bid to come up with some fast cash, aided by the pony-tailed, double-crossing ex-con Chimp Wiggins. Chimp’s boss Jerzy “Shore” Shalinski brings in ex-cop-turned-PI Knocker Morris — a guy who makes his living somewhere between “legal” and “not so much” — to find out who grabbed his product.

Enter an ambitious wannabe-Attorney General named William Blankley and his state-cop partner Nora Raines, who offer Morris a powerful incentive to help take down Shore with a made-for-TV police raid that will move the two of them up the political food chain — but leave Knocker stuck between a rock and a very hard place.

As the author explains, the book takes an alternative look at the Unites States’ national ethos.

“Set in a down-and-out economy, this book offers a lighter look at the demise of the suburban American dream,” explains Davies, a former advertising copywriter.

He continues, “What happens when two normally law-abiding, everyday suburban guys see their world unravelling? I wanted to explore that, but have some fun,” he says. “I ended up with a book that manages to combine crime, politics and counterfeit Viagra without missing some of life's harder truths.”

“Frenetically paced and brilliantly written, Hard Stop is an unpredictable ride into a world that jumps off the page and draws you into the middle of the action,” says one reader, reviewing the book on Amazon.

Another, R. McCoy, was equally impressed, saying, “It needs to be a movie with Tarantino directing. Gritty yet hilarious!”

With more up-coming releases under his belt, fans of his first novel are eagerly waiting for their next fix of compelling fiction.

In the meantime, Hard Stop is available as both paperback and e-book at Amazon.com.

His progress can also be followed on Facebook: http://www.facebook.com/declan.davies.18

About Declan Davies
Declan Davies was born on Long Island, New York and earned his daily bread as an advertising copywriter before turning to a life of crime fiction. He currently resides in the Delaware Valley of south-eastern Pennsylvania, where he is working on his next novel due out in Spring 2013. 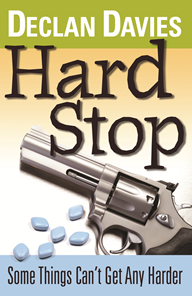