Harrowing Memoir Details Author's Fight for Her Life, and for Her Children

Written by Armande Etchin, ‘An Unexpected Journey’ is a voyage through a life touched by violence and a moving testament to the resilience of the human spirit. Readers will be enthralled by Etchin’s story, from her grief-stricken childhood, to an abusive marriage, and finally, her struggle to reunite with her children after tragically losing one.

Miami Beach, FL -- (SBWIRE) -- 01/21/2014 -- Born in Ivory Coast, West Africa, Armande Etchin’s life was marked by tragedy as a young child with the death of her beloved mother and her placement in an orphanage.

In her searing new memoir, ‘An Unexpected Journey’, Armande details this time as one of uncertainty.

“I didn’t know what would happen next,” says Armande “When I grew up, I married, but my husband was abusive. He would beat me relentlessly, and soon, did so in front of my children. I felt I had nowhere to turn, and struggled to keep faith that there was a better life waiting for me.”

Finally forced to flee, Armande traveled to Paris, France and eventually to the United States. “I feared that my husband would kill me and indeed, I think he would have if I hadn’t left,” says the author.

‘An Unexpected Journey’ is a light in the darkness, and the tale of a woman who endured even under the most brutal of circumstances, fighting for her children and finding courage through her belief in God.

Synopsis:
An Unexpected Journey is Armande Etchin’s powerful and heartfelt story about her struggles and survival. It is the compelling chronicle of her life's journey, which began in Ivory Coast, West Africa, where she was born, continued through such far-flung locations as Senegal and France, and finally led her to the United States of America. Her inspiring story is of one woman's perseverance, her refusal to give up, and her ultimate triumph, despite experiencing the most harrowing of ordeals and despite seemingly impossible odds, by having faith in her God and how God came to her and gave her the courage to stay strong!

As the author explains, writing the memoir was a deeply personal and intimate experience, allowing her to navigate through the complicated emotions of her past and envision her future.

“My only thought while telling my story was how determined I was to reunite with my children,” says Etchin. “I remember that most, and it informed every word on the page – I was desperate to have them back in my arms.”

Continuing, “I never lost hope, and I think that is what readers will take away from the book. They will feel my faith in God, and how that faith allowed me to triumph even when it seemed it would be impossible to persevere. I am proud of that, and thrilled to share my story.”

‘An Unexpected Journey’, is available from Amazon: http://amzn.to/19zVXCg

About Armande
Armande now lives quietly in Miami Beach, Fl. Where she is having a well deserved rest, she now has five grandchildren and spend times with a few close friends and takes care of her husband and her youngest son. As she looks back on her long and difficult journey ,she knows it was her relationship with God that kept her strong and gave her the strength to go on. 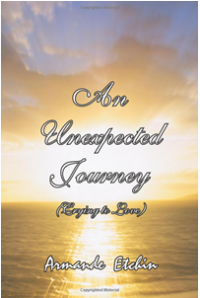