When a thrill-seeking female pilot plays a criminal ‘game’ with her boyfriend – where will their adventure take them?

Westmoreland, NH -- (SBWIRE) -- 08/21/2012 -- Those with a thirst for action, adventure and the odd spot of criminality will revel in the story of ‘Hashimoto Blues’, the latest hit novel from author Sarah Dupeyron.

The self-published title tells the story of a brave and unconventional small-time criminal. With its captivating narrative and fun premise, Hashimoto Blues is gripping readers across the country.

Ellie Fox, quirky pilot, mechanical genius, and drug smuggler, never thinks ahead to the consequences of her actions.

When her boyfriend, Max, asks her to “play a Game,” his term for one of his crazy criminal ideas, Ellie agrees and the two of them wind up on the hit list of a Japanese crime lord. On the run for their lives from their disaster in Montreal, the two lovers must find a way to outwit their formidable opponent.

Will they live to regret playing such a dangerous Game?

As the author attests, the character of Fox is a microcosm of the book’s readers.

“Secretly, everyone wishes they could live a high-life of adventure and risk. Ellie Fox is the embodiment of that spirit, even if for all of the wrong reasons!” explains Dupeyron.

“Hashimoto Blues is a fantastic read, a thrill ride filled with guilty pleasures. It oozes with coolness and is the perfect travel companion. I highly recommend this book!” says one reader, reviewing the book for Amazon.com.

Another reviewer, K. Arnini, was equally as impressed:

“Writer Dupeyron excels at this debut novel full of surprising twists and turns. At once thrilling, mysterious and darkly comic, she's able to pull you in after the first chapter and not let you put it down until the last page,” she said.

All of this comes from a writer who has never before published any of her work. With such rapid success in a short space of time, critics are expecting Dupeyron to boast a long and established literary career.

“The world of self-publishing is often perceived as being tough. It is, but anyone who puts their mind to it can break through the struggles and enjoy the same success as authors backed by major publishing giants,” she adds.

Hashimoto Blues, published by CreateSpace, is available now from Amazon.

For more information, as well as a sneak-peak at chapter one, please visit the author’s official website: http://www.sarahdupeyron.com

About the Author: Sarah Dupeyron
Sarah Dupeyron lives in New Hampshire with her husband and two dogs. When she's not writing, she's traveling, practicing martial arts, or working at the local public library. 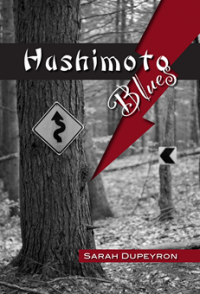