“A lot of investors are just coming in with cash, and buying up multiple properties because home prices have become more reasonable. I know of one Japanese national who bought 100 properties!

“Compared to the housing slump of 2008, 2013?s market is on the rebound, and it’s good for both buyers (because home prices are evening out now) and sellers (because there’s a lot of activity in the market due to the lower prices).”

Now is the perfect time, especially for first-time buyers, because the federal government has continued to lower interest rates to an all-time low, and it’s expected they’ll continue to be low (WaikikiBeachHouse.com).

In general, Hawaii’s property market has been more robust than the rest of the nation’s. Even after the recent housing crisis, Hawaii bounced back faster than other states primarily due to its geographical isolation, but also because most of Hawaii is considered prime real estate (HawaiiInvestorsClub.com).

“Overall, January’s numbers are good, with sales of single-family homes and condominiums continuing to be strong,” said Kevin Miyama, president of the Honolulu Board of Realtors. “The median sales price for single-family homes dropped due to the higher volume of sales this year over last in the lower price ranges. This means there were fewer high-priced homes sold compared to the mid- and low-priced, which bumped the median price down, due to the high number of first-time homebuyers getting into the market.

“There is a lot of activity in the market and we’re optimistic low interest rates and reasonable prices will continue to fuel the positive trend we’ve been seeing these past few months.”

Century 21 is one of the most recognized real estate brand names, according to an online survey of over 1,200 U.S. homebuyers and sellers in 2012 (commissioned by Century 21). 96 percent of the respondents had “seen or heard of” Century 21. When respondents were asked to identify the “most respected” brand in the real estate industry, Century 21 also topped this list (Inman News 2/20/2013).

Whether you’re a first-time buyer or a seasoned investor, contact Dave Dickey your trusted Century 21 agent for a free consultation: Aloha! 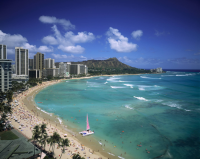