Written by Dr. Garry A. Flint, ‘Healing Your Mind and Soul’ uses a physics model with multiple dimensions to present a new and revolutionary approach to spirituality and quantum reality. By explaining significant aspects of spirituality, the book is poised to resonate with readers around the world.

Vernon, BC -- (SBWIRE) -- 09/25/2013 -- Traditionally, a book such as Garry A. Flint’s ‘Healing Your Mind and Soul: Therapeutic Interventions in Quantum Reality’ would be used only by those in a spiritual setting. However, Flint’s multi-faceted approach makes his work of immense value to anyone within the science, healing, religion, spiritual, and cosmology sectors.

The text is a fascinating and stimulating guide to understanding consciousness, the nature of reality, evolution, and afterlife. While only released last year, numerous health professionals as well as those following a spiritual path are already successfully using the book.

In his groundbreaking book, Healing Your Mind and Soul, Flint approaches healing from the point of view of quantum reality. He creates a model of quantum reality, which explains ancestral influences, distant healing, and the cause of our experience of reality. The model shows that we are all connected and created in a logical and orderly relationship with one another to give us more happiness and less pain, which suggests a loving creation process.

At the spiritual level, Flint uses the model to define the soul and to discuss prayer and afterlife. He defines Wisdom as a rich resource in the hidden reality. It can be used to cause deep healing of many issues. Examples of the communication between the therapist and patient teach the reader a way to treat intruding souls, ancestral fields, and to use Wisdom to treat common issues. Other experimental interventions are given. Healing Your Mind and Soul is an invaluable self-help guide that breaks important new therapeutic ground for both the health professional and the layperson.

As the author explains, his self-help guide presents many new concepts and models.

“It develops a new model of the Subconscious, which is validated by its use in treatment paradigms. He presents a physics model of the 3D reality while discounting x, y, and z, and time as used in quantum physics. Modern physicists are making the same mistake as Copernicus who had the earth as the center of the universe. Granted they explain a lot of phenomena in our universe, but they are using x, y, and z to explain the cause of the box with measures from inside the box. I think this is most important, but it is really a side issue of the book,” says Dr. Flint, a psychologist with over 40 years of clinical experience.

He also said, “It breaks new ground by explaining nonlocality as used in surrogate treatment. I give interventions that validate the model, which is different from explanations given by 3D physicists. I assume that processes in the quantum reality are similar to processes in 3D reality – namely, that a stimulus causes a response in 3D reality suggests that a name causes the field or soul of a distant person to manifest in the presence of the person providing the stimulus.”

Since its release, the book has garnered a consistent string of rave reviews. For example, one reader commented, “After using these techniques in situations which were previously untreatable, or at best illusive, and getting significant and virtually instant change- I highly recommend the book. The model proposed here is another arrow in the quiver that can be used immediately, and gradually developed into a powerful ally, in your quest for a deeper connection with yourself and the universal mind.”

In short, all readers will find it an invaluable and practical guide to getting in touch with their subconscious and interventions to treat barriers in their Personal Field and, most importantly, to experience spiritual growth.

About Dr. Garry A. Flint
Dr. Garry A. Flint is a psychologist with over 40 years of clinical experience. He has treated issues in the quantum fields for the last 15 years. He is the author of three previous books, Emotional Freedom, A Theory and Treatment of Your Personality, and A Healing Legend, co-authored with Jo C. Willems. 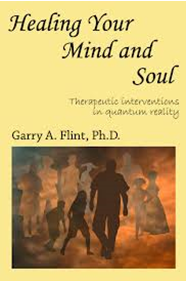