Philip S. Chua, MD, FACS, FPCS is delighted to announce the release of his new book, ‘Let's Stop ''Killing'' Our Children: Disease Prevention Starting From The Crib | A Simplified Survival Guide For Parents And Society To Save Our Children’’.

Las Vegas, NV -- (SBWIRE) -- 09/25/2013 -- With a mind as sharp as a surgeon's scalpel and a stamina of a 50-year old, Dr. Philip S. Chua, MD, FACS, FPCS, Cardiac Surgeon Emeritus of Northwest Indiana and Las Vegas, who turns 78 on May 26, 2014, revealed his simple "secrets" to health and longevity in a recently published coffee-table guide to healthy lifestyle and disease prevention starting from the cellular (DNA) level, entitled Let's Stop "Killing" Our Children.

Listed in the US Library of Congress (Control Number 2022 908 669), this health "book of wisdom and treasures" pointed out why future children do not necessarily have to have the so-called "natural and expected diseases of adults and seniors" that all of us have today.

This valuable book is available in the United States and in Asia.

In his book, this cardiac surgeon, who trained under the world-renowned heart transplant surgeon, Dr. Denton A. Cooley, at the Texas Heart Institute in Houston, clearly laid out in an easy-to-understand layman's term the "ingredients and recipe" on how to prevent, not only arthritis, high blood pressure, and diabetes, but also and more importantly, heart attack, stroke, Alzheimer's, and above all, cancer.

Dr. Chua critically stated that "we are our body's Number One enemy; most of us are on a slow-suicide mode through self-abuse and self-neglect."

"The scientific guidelines in this health book are lucidly explained in practical terms and easy for anyone to follow and would surely change your life and those of your loved ones for the better," Dr. Chua stressed.

This book is available in hardback, paperback, and e-Book at amazon.com and at barnesandnoble.com. For expedited delivery at no extra charge and free of tax, order it at http://www.philipSchua.com.

Immediately prior to this, he underwent his Cardiac Surgery Fellowship training under the world-renowned heart transplant surgeon, Denton A. Cooley, MD, FACS, Surgeon-in-Chief and President Emeritus of the Texas Heart Institute in Houston, Texas.

Dr. Chua was the founding president of the Denton A. Cooley Cardiovascular Surgical Society, an exclusive professional association of more than 900 cardiac surgeons from more than 52 countries around the world who trained under Dr. Cooley at the prestigious Texas Heart Institute.

The author is past president of the American Heart Association, Northwest Indiana Chapter. On November 25, 1995, Dr. Chua was honored with the Sagamore of the Wabash award, bestowed upon him by then Indiana Governor and now incumbent US Senator, Evan Bayh.

In 1989 and again in 1991, he and his associate, Victor K. O’yek, MD, FACS, FRCS, spearheaded a complete heart team from Indiana, and performed 24 coronary bypass surgeries for free before an audience of cardiac surgeons from around China. These surgical demonstrations were done at the First Teaching Hospital of the Beijing Medical University, who formally invited the two surgeons from the United States.

A noted health columnist, Dr. Chua writes weekly for four newspapers in the United States, three newspapers and one health magazine in the Philippines, and three websites on the internet. The Chairman of the Filipino United Network—USA, a 501(c) (3) United States advocacy Foundation for good governance and responsible citizenship, Dr. Chua is married to a former classmate, Farida Isip Chua, MD, a retired Pediatrician. They have five children who are all physicians, and four of them married to physicians as well, all residing in the United States, with their ten grandchildren.

On June 14, 2008, this family of eleven physicians was honored in New Jersey with the Peace Award for Excellence, presented by the Honorable Willy Gaa, Philippine Ambassador to the United States, on behalf of the Philippine Economic and Cultural Endowment.

Xlibris Corporation takes pride in publishing this most informative and challenging book, entitled Let’s Stop “Killing” Our Children, whose poignant message could forever change our role in parenting and society’s perspective on health and diseases. 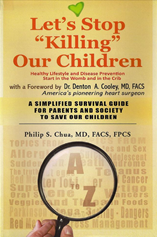