New York, NY -- (SBWIRE) -- 07/08/2013 -- While the romance genre has long been a staple of the literary world, many of its narratives blur the lines of realism with ‘sappy’ love stories that could never play out in real life. However, a powerful new novel Ria MacAlister is turning the tables with its hard-hitting depiction of the ‘woman next door’.

‘Heartshaped Shards’ replaces swept-back billionaires and doting brides with the possibility that two souls who have been beaten down by the world may one day find each other.

Kate had a future. With a degree in physiotherapy, she had hopes of pursuing a career as a sports rehabilitation therapist. But fate had other ideas.

Beaten once again and left for dead by the man she should have been able to trust with her life, Kate awakened from a coma to discover that not only has she lost the precious baby she carried, the beating also damaged her internally so that doctors didn't think she would ever conceive again. As if that weren't enough, Kate is also nearly blind due to the injury to her brain.

Scarred, not only physically, but emotionally and spiritually too, Kate moves in with her childhood friend to hopefully be able to recover. While her physical body begins to heal, her emotional state seems to deteriorate with each passing day. It isn't until Patricia Daniels, an Irish psychotherapist, comes into her life that Kate finally starts putting the pieces back together in her shattered life.

Patricia (Trish to her friends) takes Kate with her on holiday to Ireland and Scotland. Through a series of kind-hearted Celtic men who come into Kate's life, brick by brick she is finally able to begin to bring down the fortress she's built around herself. After a chance meeting at a rugby match, Kate finds herself hired as a live-in rehabilitation therapist for an adorable Scottish player named Robbie, who owns a huge manor house in the heart of Scotland.

Kate is at first horrified to find that the coach of the rugby team also lives with Robbie. Shay Walker is a mountain of a man who terrified Kate at their first meeting with his gruff attitude and sheer physical presence. But after sharing a meal and too much scotch, Kate finds that Shay is actually a tender and caring man, one she quickly finds herself falling for. The only question is whether a shattered shell of a woman can love wholeheartedly.

Heartshaped Shards is not only an endearing romance, it is a story of triumph; a testimony to the perseverance of the human spirit.

As the author explains, her narrative is having a profound effect on its readers.

“'Heartshaped Shards' is a story of the woman next door, the one you see with a black eye or a bruised cheek and wonder what goes on behind closed doors,” says MacAlister.

Continuing, “I have already been contacted by readers who have said this book was 'the catalyst to get me into therapy for my own issues,' or 'gave me some hope after my own painful marriage.'”

“I felt all of Katie's pain and fears like they were my own. I got lost in this book. Ria made the characters seem like they were real. This wonderful book had me on an emotional rollercoaster, but in a good way,” says Kelly, who reviewed the book on Amazon.

Jonel was equally as impressed, adding, “As much as the plight of the protagonist is heart wrenching, I definitely laughed my butt off more than once while reading this novel. MacAlister manages to evoke the entire emotional spectra in her readers throughout the novel.”

With its popularity expected to sharply increase, interested readers are urged to purchase their copies as soon as possible. 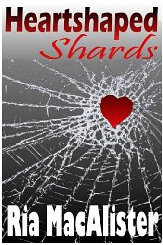