Heather Parisi Seeks $70,000 in Crowdfunding via Indiegogo for the Pearl of Hope School in Uganda

Matawan, NJ -- (SBWIRE) -- 10/07/2014 -- It was a visit to Uganda to go Gorilla Trekking roughly four years ago that forever changed Heather Parisi. After visiting the village of Lela Obaro and learning of the years of turmoil, war and carnage from Idi Amin, Kony and the Lord’s Resistance Army helped her realize she was in an area completely left behind and forgotten about by its own people. Inspiration came upon her to do something to help this community regain some semblance of normalcy as they return to the comforting routines of daily life while helping them reclaim their right places as contributing members to society itself.

Ms. Parisi is no stranger to striving as she herself lives a life centered on overcoming challenge after challenge to propel her forward. She saw an applicable parallel between her own life and the people in Uganda by teaching these helpless victims to overcome and survive in spite of circumstances through wise choices and healthy living.

Seeing firsthand the skeletal remains of people’s homes and their lives, she knew then and there she found her calling. She could be the one person in that part of the world making a difference and bringing the power of knowledge to a community thrown backwards through no fault of their own. Within four short years she launched non-profit organization, opened and started operating a nursery school and launched pen pal projects for women and children as well as a fitness program, a self-sustaining agricultural project with much more on her slate in the months and years ahead.

The power of knowledge can overcome ignorance in the same way a single lit candle can overcome darkness. Heather believes there's no better way to transform a community than through the youngest members of the family which were the seeds of her thinking that led to the opening of her nursery school Pearl of Hope in February 2013. Thirty wide-eyed students thirsty for knowledge and hungering for a better life were there to soak up the core curriculum of a healthy lifestyle and a grassroots movement was born.

Knowledge is power to be sure and that knowledge can and often does extend to the power of life over death. Ms. Parisi’s heartstrings were tugged when she learned about Phillip; born HIV positive after his mother Grace was misinformed that she could not pass on the virus during childbirth.

Phillip is now receiving monthly doses of his medication, gaining strength with everyday from the healthy foods, fitness activities and interaction with other kids having fun all around him. Phillip is perhaps the best reason why Pearl of Hope needs to continue and move forward to 2015 with a permanent school to beat back ignorance as knowledge is shared to change lives.

It was this inspiration that naturally led to her forming and naming her endeavor “Fitness for Africa”.

Crowdfunding is sought to raise $70,000 to build a permanent campus allowing 90 students at a time to gain an education and maintain operations through 2015. All funds raised will be allocated as follows:

This crowdfunding campaign ends on October 29, 2014. 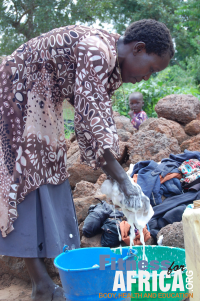 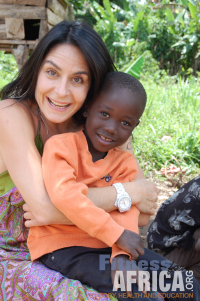