A screenwriter pays a ghastly price for inspiration—and begs for more… A director looking for fresh-faced talent finds more than he bargained for… A legendary diva will sacrifice anything for fame and glory… A TV personality discovers the twisted truth behind his co-star’s impossible celebrity scoops… A bizarre film by an unknown writer brings bloody chaos to everyone who screens it… A mail-room clerk finds out just what kind of guts it takes to become a top talent agent… These and many other stories will take readers on a blood-soaked trip through nightmare versions of Tinseltown.

The book is available in Trade Paperback format (6”x9”, $14.99) through Amazon, and e-book versions for Amazon Kindle E-Book, Barnes & Noble Nook E-Book, and Kobo and other platforms.

Big Time Books is an outlet for hard-edged genre fiction, with a focus on horror and science-fiction. They will focus on works by Hollywood screenwriters and other talented authors that are looking for a new outlet for exciting stories. 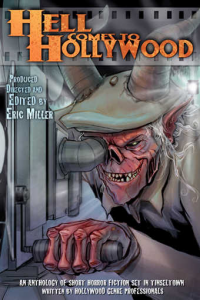