‘Her Honor’s Secret’ tells the story of a tireless and feisty heroine that will stop at nothing to secure a legal pardon for the man she loves. With the book finally complete and ready for sale, author Deatrice Toney-Duncan is inviting all members of the public and press to her official launch event in New Orleans on July 20th, 2013.

New Orleans, LA -- (SBWIRE) -- 06/17/2013 -- The Thriller genre has long been a staple of the literary world. However, critics and readers alike will openly admit that male protagonists dominate the market. However, an upcoming novel by New Orleans’ Deatrice Toney-Duncan is breaking new ground by putting a female at the narrative’s helm and proving that she is equally as daring, powerful and dominating.

‘Her Honor’s Secret’ is due for release on July 20th during an exciting launch event in the city.

She will stop at nothing including extortion, bribery, blackmail, voodoo and murder of some of the most powerful men in New Orleans, Baton Rouge and DC to secure him a full pardon.

As the author explains, her book stands unique within the marketplace.

“I truly believe that Khrystyna Danielle Kendrick is going to breathe some fresh blood into the literary market. Throughout the development phase I worked diligently to keep her as bold and driven as possible, to provide something different from the norm and to inspire women to take a piece of Kendrick into their own lives,” says Toney-Duncan.

Continuing, “She literally stops at nothing and no roadblock is too big. When you study the thriller genre and its leading characters, you’ll quickly find that my new book is unlike anything written to date.”

Early reviews have been overwhelmingly-positive. For example, one reader commented that, “From page one til the end, I got caught up in the world of Khrystyna and Landon with Darren thrown in for more fire! This book was great! You Geaux Girl! She definitely from New Orleans...girly do what she wanna..”

In fact, the book is so unique that it is being launched at an exciting event that is sure to draw a crowd.

“The book will be released on July 20th of this year, at the Community Book Center on Bayou Road in New Orleans. The public and the media are invited to come along, meet me and leave with their signed copy. One lucky buyer will also be going home with a Slick eReader. Stick around – you must be present to win it!” Toney-Duncan adds.

About the Author
Deatrice Toney-Duncan is a freelance writer from New Orleans, Louisiana---a New Orleans Center for Creative Arts alumnus. She is CEO of Toney and Associates, LLC, a ParaLegal Firm based in Kansas City, Missouri with clients across the United States, specializing in all areas of legal assistance including Document Preparation, Legal Research, Arbitration, Mediation and ParaJudge Services. 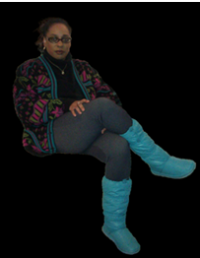