Heroes of the North Releases Their First Trade Paperback: Compendium

Montreal, QC -- (SBWIRE) -- 06/20/2014 -- Heroes of the North is excited to announce the release of their first Heroes of the North trade paperback, under the MSD Publishing imprint. This trade features an amazing cover illustrated by Donald Caron and will collect the entire three previously published Omnibus as well as the critically acclaimed, out-of-print one shot, Crimson: Dark Origins. The individual issues were originally published through Ardenn Entertainment and available through Diamond, convention appearances, and on-line. The trade paperback will be available on-line, through convention appearances and through the retailers section of the Heroes of the North website.

This first trade paperback release will mark a major turning point for Heroes of the North as all future comic book releases in the foreseeable future will be in this format for the award-winning series. "Trade Paperbacks will be the new direction we take for our future books," says Christian Viel, editor. "We like the idea that you can get the entire story in one book. You get the whole story and can read it at your pace and leisure. It is the comic book equivalent of bing watching on Netflix! And we believe that it is the way of the future. " Compendium is now available on the Heroes of the North website and can be ordered directly at http://www.heroesofthenorth.com/COMPENDIUM. The books retails at $39.99 CAD for 263 pages and features the artwork of established and up and coming Canadian and International artists such as Dan Parent (Archie), Gibson Quarter (Undertow), Marcus Smith (Halloween), Patrick Hénaff (The Will of Captain Crown), and many more! Written by the brotherly duo of Yann and Michel Brouillette, with a story contributed by Canadian writer and artist Ty Templeton, (Spider-Man, Batman and many more!), Compendium features a different take on traditional Canadian superheroes, with a darker tone and a radical approach about what would a world with superheroes be like.

Compendium ships now for retailers and fans alike and is available through the Official Heroes of the North website at www.heroesofthenorth.com.

About Heroes of the North
Launched in 2010, Heroes of the North is a unique transmedia experiment where the story is declined through live-action videos, comic books, novellas, character diaries, a novel and more. Both the web series and the comics have enjoyed critical acclaim and have won several awards. For more information, please visit: http://www.heroesofthenorth.com.

Heroes of the North - Logo 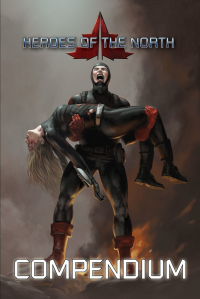