Tempe, AZ -- (SBWIRE) -- 01/09/2012 -- This month marks the start of an election year, which means the news will be riddled day after day with stories about various politicians and their variety of campaign promises, speeches, and antics.

For many people, hearing serious political stories day after day can get very tiring. Political satire can be an enjoyable and entertaining way to take a break from the constant stream of hard news stories.

A website has been getting a lot of attention lately for its interesting, twisted and thought-provoking selection of political writing that takes zoological, historical, and scientific facts and compares and contrasts them to current politics.

High Political Heresy was created for anyone and everyone who likes to learn interesting facts about history and science as well as politics. The website features articles, political cartoons and links to ebooks on the subject.

“Tea-partiers and Reagan Republicans will (it is hoped) enthusiastically welcome this new website, but Liberals, Progressive Democrats, Al Gore supporters and Aggressive Feminists are advised to immediately flee at all costs, in order to avoid symptoms of physical distress which even Obama-care might not cure,” an article on the website’s home page declares.

The author of the ebooks, High Political Heresy Volume #1 and Volume #2, is named Damocles, otherwise known as W.D. Templeton. As an article on the website notes, Damocles is an “intellectual iconoclast” in his mid-fifties who has worked in the investment and insurance fields his entire career.

Described as having a writing style that is one-third Fox News Channel, one-third “The Onion” and one-third “Encyclopedia Britannica, with a dash of Ted Kaczynski,” Damocles does an outstanding job of combining typically unconnected subjects in a way that is both educational, entertaining, and thought provoking.

For example, in an article titled “The Perfect Democrat,” Damocles starts out educating the reader with scientific facts and information about the angler fish, then finishes the story by comparing the unusual-looking fish to democrats.

“Upon abstract analysis, one notes that the male/female angler-fish relationship is metaphorically identical to the relationship between many Democrat voters and the Democrat politicians in Washington that they vote for,” he wrote.

The website and ebooks also feature the talents of three artists: Hermione Anonymous, Dominick Hampton and Solomin Lin, whose collection of political illustrations add depth and humor to the prose.

About High Political Heresy
High Political Heresy is a website that was created for people who like to learn interesting facts about nature, science and history, and how all three can often be linked to politics in a humorous and thought-provoking way. The site features articles, political writing and cartoons as well as links to ebooks on the subject. For more information, please visit http://www.highpoliticalheresy.com 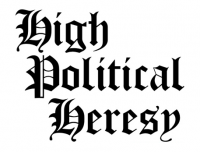