At nearly 16 hours of audio, The Goddess Queen audiobook delivers sword and sorcery style adventure. This second audiobook from fantasy author Tracy Falbe continues the saga of The Rys Chronicles.

Since its first publication in print and ebook formats, fans of Falbe have consistently given this second book of The Rys Chronicles 4 and 5 star ratings at online retail stores. A U.S. reader review in the Kindle store wrote, “The characters really stand out.” In the U.K. Kindle store another reader wrote, “…the intrigue of what is coming next makes it difficult to put the book down.”

The Goddess Queen is a character driven Medieval fantasy style adventure in which a daring rebellion launches a risky war against the ancient magic of Onja, the rys Queen who has ruled human kingdoms as a Goddess for thousands of years. The rebels must confront allies of the Goddess and conquer her mountain city protected by ghost slaves. A powerful romance is also intertwined with the adventure as the hero and heroine savor their love while enduring the horrors of war.

Falbe who has been self publishing since 2006 and has 9 novels selling worldwide was eager to get into the audiobook market when it became accessible to indie authors. She discovered the Audiobook Creation Exchange at Amazon and was excited to sign on for distribution to iTunes and Audible.

“The days of only mainstream titles from bigger companies being produced as audiobooks are over. Listeners now have a bigger selection and the option to discover self published talent,” Falbe said.

She continued, “My novels are long epic fantasies. I know some people turn to audiobooks because their eyeballs are too busy to read to long form fiction. Now they have a chance to enjoy The Rys Chronicles too.”

In addition to its availability at any country served by Audible or iTunes, Falbe also sells The Goddess Queen audiobook at her web store Brave Luck Books. Unlike Audible and iTunes that set their own audiobook prices, Falbe has control of pricing on her direct sales and offers the complete audiobook for only $8.95.

Completing the production of The Goddess Queen audiobook was an important milestone for Falbe. After producing Union of Renegades: The Rys Chronicles Book I in audio in 2011, she felt it was important to make the next installment of the saga available to listeners. 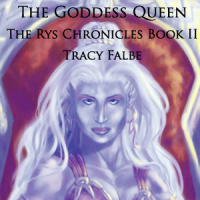