The Unsigned Artists Takeover Vol. 1: The "Do School!" campaign aims to advocate literacy and education. The Hip Hop Head Foundation is trying to grow awareness against low literacy in urban areas.

New York, NY -- (SBWIRE) -- 04/07/2014 -- The Hip Hop Head Foundation Inc is a Non-Profit organization formed in 2013 that promotes literacy and education in the country. As part of the foundation’s The “Do School!” campaignthey are raising awareness about the importance of attending school and acquiring an education. To this effort they have released a music project that contains songs by 28 of the most incredible unsigned hip-hop artists from around the country. The artists have come together in support of the foundation's efforts of advocating literacy and education.

The founder of the organization, author C.C.Cowan elaborates about the campaign, “We are very much concerned at the alarmingly low rate of literacy in the urban areas of our country. It has become an epidemic. Our campaign spreads awareness about the importance of being reading, being literate, attending and finishing high school. Also about the benefits of seekinggreater levels of academic success by attending college. We reinforce these messages through a series of initiatives involving the hip-hop community.

DJ Jelly (Atlanta), DJ Malone (Chicago), DJ Mastermynd (Florida), DJ Big Lou (Brooklyn, NY) and LEGENDARY DJ RON G are the hosts of the project which will be distributed during outdoor events, concerts and during in-school discussions.Proceeds from the music project will benefit college bound students in need of scholarships. It will alsohelp to produce seminars, in-school panel discussions and community outreach programs that help inspire the student and youth population in inner-cities.

A member of the Executive Council of the foundation said,“We are grateful to the artists who have volunteered to support our cause and who assist in spreading the message that “Education is a must.” We are overwhelmed by their willingness to participate in free concerts, public service announcements, in school discussions and reading labs.”

The parents of Stephen George, a high school studentis delighted, “I see a lot of hope in the foundation. “It is heartening to see that The Hip Hop Head Foundation has come forward to address an issue that has afflicted large sections of the urban population andis a very real threat to future generations. We salute their efforts and will be glad to contribute to the cause.”

The music project targets high school students and hip-hop fans. It is available at all music stores including iTunes and Amazon and also on the foundation’s websitebeginningApril 1, 2014. It will also be digitally distributed across the nation. 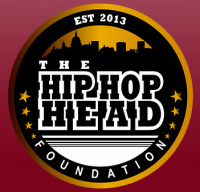