Sandra Marchetti’s compelling book showcases the immense power the Church has to hide an abundance of discriminatory events, while creating its own laws that directly contradict the Bible.

Boca Raton, FL -- (SBWIRE) -- 02/28/2013 -- Pope Benedict XVI’s shocking resignation comes at a time when many are questioning the integrity of the Church as a whole. With abuse and corruption becoming somewhat commonplace, many are calling on Faith leaders to question and investigate the practices taking place within their own institutions. Wrapping this concept into a ground-breaking exposé, Florida’s Sandra Marchetti is delighted to announce the launch of her new book.

‘Holy Heresy’ both uncovers the Churches discriminatory behaviour, while directly challenging the contradictory laws it has created.

What was the absurd reason why a Catholic could not eat meat on Friday? Do you ever wonder why your priest has to be a celibate, unmarried man?

If the apostles were married, when did Christ tell the Catholics that their priests were not to be married?

There’s obviously been some mistake. If Christ said that priests were not to be married, how is it that history shows us that 39 popes were married? In fact, there were even three sets of father-and-son popes and all the apostles, except for John, were married.

Catholicism openly admits that many of their own doctrines did not originate from the Bible? For example: in 1834 the Immaculate Conception of the Virgin Mary was proclaimed by Pope Pius IX. Yet, the Bible states that all men, with the sole exception of Christ, are sinners. Did you know that in 1439, the doctrine of Purgatory was proclaimed a dogma of faith by the Council of Florence? Yet, the Bible states that Christ instituted only two ordinances, Baptism and the Lord’s Supper (Matthew 28:19-20; 26: 26-28)

If you feel guilty about asking questions concerning your Catholic faith, you have no reason to any longer. Most of your questions have answers that will absolutely shock you! WHERE DID THESE THINGS COME FROM? CERTAINLY NOT THE BIBLE.

Learn why the Church has been rapidly losing its flock throughout the decades, as well as its priests.

As the author explains, her book’s release couldn’t come at a better time.

“Holy Heresy comes at a perfect time as the Pope steps down. It shows how the Church has immense power to hide abuse and other discriminatory events and at the same time, how it makes its own laws contrary to the Bible,” says Marchetti, who has spent twenty years collecting the stories of those within the Catholic Church.

She continues, “In 1991 I put an ad in USA today regarding experiences with the CC. I had to increase my phone lines from one to eight in order to handle the calls. Most were abuse, sin, marriage outside the church, etc. It was totally shocking and made me realize that the institution itself was inherently flawed.”

Critics praise Marchetti for the diligent efforts she has gone to in order to expose bad practices and keep those in a position of religious authority accountable.

Due to the book’s increasing demand, interested readers are urged to purchase their copy as soon as possible.

For more details on the book, the author and her other popular titles, visit: http://sandramarchetticrocker.com/

About the Author: Sandra Marchetti Crocker
Sandra Marchetti Crocker is a Clinical Hypnotherapist specializing in Solution Focus and Past Life experiences. In fact, most of her writings deal with past lives; for example, Eye for an Eye and Memories on’t Lie clearly indicate that the past lives of the characters showed a monumental impact on their present lives. Ms. Crocker’s fictional writings can be described as suspense thrillers incorporated with a little element of romance and mystery.

Born and raised in the small state of Rhode Island, which is the location of many of her books, Ms. Crocker currently resides in Boca Raton, Florida with her husband.

Her future? "Writing, writing, writing. I don’t want to live a single moment of my life without thinking about the next plot, title and ending, because I’m sure I wouldn’t know quality of life if I couldn’t write." 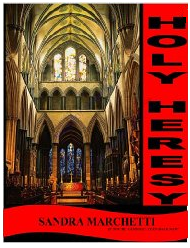