Breakaway cinematic effort already a hit with the public garnering 4 and 5 star reviews.

Los Angeles, CA -- (SBWIRE) -- 03/22/2017 -- While the national roll out of Whispers is today with availability on Amazon, RedBox, CD Universe and Family Video among other outlets, Overstock.com managed to get an initial supply of the movie which promptly sold out. Whispers is back in stock at Overtsock but due to the popularity of the film, sales remain strong and it looks like the popular online seller will need to place yet another order to keep this runaway hit DVD in stock.

The film synopsis, while short, belies the complexity of Whispers on hitting a wide range of human emotion; "A young couple grieving the recent death of their daughter move to the countryside where they are haunted by their tragedy and a sinister darkness."

"Whispers offers a harrowing experience set nicely against the backdrop of supernatural elements combined against a tragic storyline. One to check out and own!" – HorrorNews.net

The single biggest online resource for movies – IMDb.com – has been tracking the surging popularity of Whispers for the past two months as more and more people take notice of this standout movie. Transcending the boundaries of any single genre, Whispers' is immediately identified as a horror movie while its qualities as a thriller or a suspense film are undeniable.

Not surprisingly, film producer and Whisper's co-star Craig Rees couldn't be happier, "I'm so glad Whispers is being received so well and hope for more of the same on the next film I've been involved with entitled 'Violence'."

Shot on location in the pastoral environs of Devon, England on the actual grounds of The Old Rectory Chulmleigh which has a factual history of tragedy all its own. The original house was built in 1826 and was destroyed by a fire long ago. The grotto area is the only part not of the original house that remains. Rumors of the house being haunted have been circulating for quite some time. Some members of the cast and crew have stated hearing voices and experiencing other supernatural phenomena during production although none of these claims could be substantiated.

Details of availability on Amazon, CD Universe, Overstock, RedBox, Netflix and other channels are available on the official Whispers website – http://www.whispersfilm.com 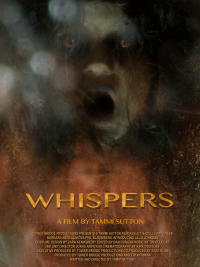