Seoul, Korea -- (SBWIRE) -- 10/12/2012 -- The Facebook gambling game app Hotel Casino saw its recent grand update unveiling with several new games that have been updated and improved. Accessible via its game app directly or the Fan Page, the game allows players to manage their own hotel casino and play each other at their favorite casino games for simulated bets and rewards.

Hotel Casino was recently updated with new games and unveiled for use by activated users on October 10, 2012. The three new slot games and a stud poker game have been vastly improved from the recent pre-launch power test. “Utilizing the feedback we received from the game users, we were able to improve each game’s stability,” said Soribada Games General Manager Lee Hee Jun. “We have seen a threefold increase in players since the pre-open launch last month.”

The new slot game “Treasure Island” ties the weather and background in the game to the chances of winning and also features a bonus game. The other two new slot games catching the attention of players are “Dragon Orb” and “Mafia City,” that both feature some thrilling ways to trigger the Free Spin. The fourth new game, “Caribbean Stud Poker” is the first version of the popular poker game that is available via the world of Facebook games. Each of the new games provides more chips for return visits, the ability for players to monitor the information in each other’s game room, and increased loading speed to get the action started faster.

Players can buy and manage private hotels designed to fit a diverse background and history. The price of the hotels depends on its individual grade, and once purchased, the player profits from admissions, dealer generated revenue and table fees. The more guests that come to the casino, the higher the profit and bigger the VIP list, which allows the player to upgrade the casino.

About Soribada Games, Inc
Soribada Games, Inc. was established in 2012 to develop and publish Smartphone games as well as web games from Korea. Their most recent game to be published is “Hotel Casino,” a Facebook game that allows players to buy and run casinos for simulated profit as well as play popular casino games in the city’s casinos. “Hotel Casino” was developed by Merrywind, Inc. and is accessible directly from the Facebook game app or the Fan Page. 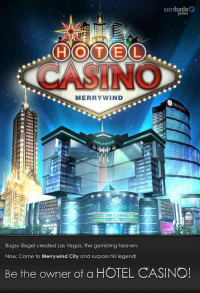