Derek Doepker, who himself is a great fitness freak, launches his book “How To Stick To A Diet” on Amazon.

New York, NY -- (SBWIRE) -- 10/03/2012 -- Derek Doepker, a fitness expert and blogger at Excuse Proof Fitness, launches his book “How To Stick To A Diet” on Amazon, underlining the importance of psychology in the role of weight loss and lasting health. This 104-page book reveals what modern psychological research has discovered about why it is so difficult to change long standing dietary habits. According to the author, the insights included in the book will help people to control their cravings and create permanent changes to their diets. He states the book focuses on how the typical approach of relying on willpower alone often falls short, and what individuals must do instead to create and sustain the motivation they need to succeed when dieting.

Derek maintains that most people know which foods are healthy and which are unhealthy, but they lack the motivation to follow through with their knowledge. Derek says, “it's not enough for people to just know what foods to eat, they need to know how to get themselves to actually eat those foods. That means getting the motivation to get started, keep on going, and be able to overcome the various everyday obstacles like time constraints and limited budgets.”

Derek also states, “Many people fail to achieve long-term weight loss through dieting. It’s not that diets can't work, but most people take the wrong approach to dieting. They focus on the outcome rather than the process. This means after losing weight, people often go back to their old behaviors and gain all the weight they lost back again. This is where his book “How To Stick To A Diet” plays a major role in helping people sustain their results by focusing on developing healthy eating habits that last for a lifetime.”

The author maintains that he doesn’t preach any particular style of eating in his book. Rather, he explains how people can get the tools they need to stick to any diet plan of their choosing. He also emphasizes the importance of not getting too obsessive about one's eating habits but rather to seeing healthy eating as something to shoot for the majority of the time while still enjoying one's favorite foods on occasion. Derek’s book “How To Stick To A Diet” is now available on Amazon, and anyone wanting to develop the motivation to follow a healthy diet plan can order the book by following the link http://www.amazon.com/dp/B009GQ4E4W.

About Derek Doepker
Derek Doepker is the author of the book “How To Stick To A Diet”, which he has written after investing thousands of hours of research on nutrition, exercise physiology, human psychology of eating. His book tries to demystify the human psychology of eating and helps the readers to develop the willpower to control their food cravings and keep them motivated to stick to a diet plan.

Contact: Derek Doepker
Should you have any question, or want to know more about his book, you can contact him at: info@excuseproof.com 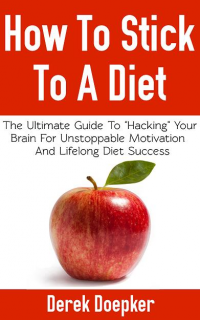