Athens, GA -- (SBWIRE) -- 07/08/2013 -- Sex therapist Gloria Brame announces the release of her new book, "The Truth About Sex, A Sex Primer for the 21st Century Volume II: Sex for Grown-Ups". Attitudes toward sex roles and sexuality have evolved rapidly in the first years of the 21st century. The author of numerous books on the wide range of human sexual practices, and a recognized expert in sexual lifestyles, she bills her book as, "the ultimate sex-positive adult primer." Gloria Brame has been described as the Albert Einstein of kinky sex.

1. Sex is as complicated as the adults having it

3. Every adult can have good sex

She views these rules as essential for an adult "re-education" of sex. Western society has rapidly become more accepting of sexual lifestyles which were once questioned as "abnormal" or "perverted". This acceptance has led many people to seek out new sexual experiences which were once taboo, the active practice of which could have compromised an individuals standing within his or her family or community. Still, even among people eager to try new experiences there often co-exists a feeling that one must fit into some sort of sexual definition.

By drawing from the history of sex, scientific data, studies and anecdotes from her private practice, Gloria Brame demonstrates that sex practices and lifestyles are unique to the individual with labels and definitions leftover remnants of a categorical way of thinking about sex which the data and human desire no longer support.

"The Truth About Sex, A Sex Primer for the 21st Century Volume II: Sex for Grown-Ups" is available from Amazon in either Kindle eBook format or paperback editions. The book can be found by going to http://www.amazon.com/Truth-Primer-Century-Volume-ebook/dp/B00DOZWD62 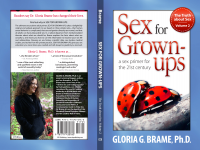