Toronto, Canada -- (SBWIRE) -- 06/13/2011 -- The speed of technology advancements is increasing rapidly, and it is no different in the Security Camera industry. First, the analogue cameras and VHS recording systems pioneered the security industry. Then DVR systems were introduced to the scene, which proved to be a godsend since this new technology was able to replace hundreds of VHS tapes that, until the digital video recording has been introduced, the businesses had to continuously change and store. Not to mention the fact that the VHS recorders were getting old and with all those moving parts, started to break down more frequently. With the new DVR systems that began to penetrate the market in the late nineties, businesses could keep their current analogue cameras but were able to benefit from the DVR’s ease of use by accessing any video clip they wanted with just a few key strokes.

In a fairly short period of time, not only has the security camera industry seen the introduction of PTZ (Pan, Tilt, Zoom), IP, and Mega pixel cameras but also the advent of intelligent security camera software features, which are beginning to be appreciated by more and more businesses.

Fast food, retail, banks and even schools are now viewing their Security Camera Systems not just as a loss prevention and safety tool but rather as a cost-saving and profit increasing system. Companies such as i3 International headquartered in Toronto, Canada with thousands of employees, reps and affiliates worldwide have been instrumental in helping businesses implement such software features including POS, Card Access integration, video analytics, Business Activity Monitoring and People Counting into their current systems.

“Once businesses begin to see the almost immediate dramatic benefits and results they get from these software features, they often wonder why they’ve waited so long to implement them.” Say’s Vy Hoang, Executive V.P. Sales and Marketing for i3 International Inc.

IP cameras are another advancement that is taking a leap into mainstream security systems. With their accessibility for remote viewing, anywhere there is an Internet connection, high resolution images, on-board processors and simple system integration compatibility, companies are quickly warming up to the idea of upgrading from their old outdated analogue systems. One of the best features an IP security camera offers is that they allow for future upgrades to benefit from new advancements and features that may come along down the road.

Unfortunately what was once a godsend is now a dying breed. As more and more businesses start seeing the undeniable benefits of IP and MegaPixel cameras, they are looking for a hybrid system that will accept not only their legacy analogue video cameras but also the newer IP and Megapixel cameras.

Appreciating the dilemma that thousands of businesses and institutions are facing with their outdated Security Camera DVR systems, i3 International set out to develop the all-in-one solution to not only create a system that adheres to today’s Security technology requirements but also one that will be easily upgradeable down the road.

THE NEXT GENERATION IN SECURITY CAMERA DVR/NVRs

Introducing the next evolution in network video security technology, the new Annexxus AX360. This new unit will be able to successfully replace all traditional DVR systems.

“We are so excited about launching the Annexxus AX360 at the NRF Expo on June 13-15, there is no doubt that this system will be of great benefit for thousands of businesses looking for solution to replace their current DVR system at minimal cost” states Vy Hoang. 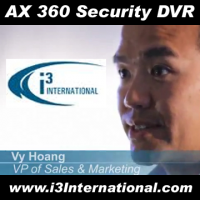