London, UK -- (SBWIRE) -- 05/07/2014 -- To commemorate Roget Bannister's four minute mile run, Iffley Road releases a new video that outlines the tremendous accomplishment and what it meant for the sport of running.

The four-minute mile had long been the Holy Grail of middle distance running. 4 laps of the track in 4 minutes. It was a stark simple challenge.

The time was approached tantalizingly slowly during the first half of the 20th Century. (4:02.06 in 1942 and 4:01.06 in 1943, both by Arne Andersson of Sweden. 4:01.04 by fellow Swede Gunder Hägg in 1945). Progress was so slow that the barrier was psychological as much as physical. Many simply considered the human body incapable of achieving this.

Spurred on by failing to medal in the 1952 Olympics, Roger Bannister decided to attempt the four-minute mile before leaving athletics for a career in medicine. By 1954 it had become a fight for time between Bannister and two other realistic contenders, Australian John Landy and American Wes Santee.

Bannister got there first. On a windy overcast afternoon 6 May 1954 he clocked 3:59.4 at Oxford’s Iffley Road track. The event was the Amateur Athletics Association (AAA) vs Oxford University meet. Bannister was paced by Chris Brasher and Chris Chataway.

None of the athletes that day were professionals. Bannister had spent the morning working at hospital in London before catching the train from Paddington up to Oxford. The weather was wet and windy most of the day, but calmed a little by 6pm for the start of the race. Brasher and Chataway paced Bannister perfectly, leaving him 59 seconds for the last lap. Commentator Ross McWirter announced the results – the moment he said ‘three’ the crowd erupted. History had been made.

Once the barrier had been broken times fell rapidly. Landy broke the record within weeks and there was a glorious period for British running in the early eighties when Cram, Coe and Ovett traded the record no fewer than 6 times. The current mile record stands at 3:43.13 set by Moroccan Hicham El Guerrouj in 1999.

That first sub 4 minute mile continues to inspire runners today. The mile is the classic “middle distance” challenge and is particularly challenging, as it requires both anaerobic and aerobic fitness.

About Iffley Road
Iffley Road is a new company, specialising in stylish, technical running wear. Founded in 2013, Iffley Road is the first high-end British running wear brand, creating elegant and understated kit made from highly technical fabrics. The clean look of Iffley Road’s running tops and running shorts harks back to the period of that first sub 4 minute mile. Created by runners for runners, the brand philosophy is simple: running should be free, uncomplicated and beautiful. This is represented in a small but carefully refined collection of essential running pieces. Invest in the best and a runner needs fewer items. 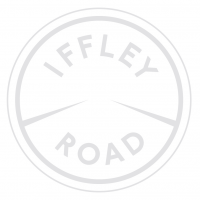