Yet another smash-hit novel from author Scott M. Sullivan, ‘Impetus’ thrusts readers onto a dire post-apocalyptic world and into the lives of the few that survived. However, as a deadly virus threatens to finish them off, the novel shifts away from its genre’s dramatic stereotypes to instead examine how the human condition adapts to such finality. There’s nothing else like this on the market…

Watertown, CT -- (SBWIRE) -- 07/07/2014 -- While nobody can deny the sheer boom in popularity of post-apocalyptic and dystopian novels, readers and critics alike are constantly crying out for unique material that doesn’t succumb to the simple ‘recycling’ of existing narratives. Thankfully, Scott M. Sullivan’s latest release is bucking the trend with gusto.

‘Impetus’ does away with his genre’s tendency to dwell solely on the catastrophe, to instead examine the very-real human experience and condition behind a world-changing disaster. Taking readers on a bold societal, behavioral and emotional trip, the novel is naturally being earmarked as one of the most exciting releases of the year.

When the world first heard about the meteorites, it was already too late.

Ten arduous years later, Mick and his small group of eight had adapted to the new way of things. With no clean running water, power, or forms of communication, the Earth went backward, taking with it almost everything they held dear. Survivors like Mick were forced to do the best they could with what they had. Because in the post-Impact world, alternatives were a luxury that no one could afford.

Now a deadly virus promises to finish the job the space rocks failed to.

With the clock ticking down on their lives, Mick will navigate the deceitful webs spun by those that oppose his drive for salvation. And along his quest to prevent another catastrophe, Mick will rediscover what it truly means to be human.

“The dystopian world would be radically different to ours, causing huge and insurmountable shifts in how humans behave,” explains Sullivan. “That’s the focus of this novel, offering a showcase of the new human experience. People would become a lot more cut-throat, but also more grateful for what they have.”

Continuing, “I believe that Impetus takes a different approach to a genre that’s somewhat stagnant.”

Readers have been lavish with their praise. Maria Beltran for Readers’ Favorite comments, “Impetus is a mesmerizing novel where the characters are pushed to the limits of their humanity. The story makes the reader imagine how it is to live in such a dire situation. Vivid, fast paced and with well-rounded characters, it is easy to imagine the breakdown of civilization. Indeed, this novel can make you ask yourself what you will do if you are in the same situation. And it is chilling to realize that something like this can actually happen to our planet. Great read!"

Eduardo Aduna adds, "Tight, taut writing and meaningful characters make this novel a good read for those interested in the post-apocalyptic genre. Upon reading The End, I felt a strong desire to write the author and tell him to create more stories about Mick as well as his allies as they struggle to carve out an existence in such a hostile world. Impetus is a good read, so much so that I strongly feel that it deserves to have a sequel."

More information can be found on the author’s official website: http://www.sullivanauthor.com.

About Scott
This is Scott’s third novel. He is fortunate to have a loving wife for the past 11 years, along with his amazing children, ages 8 and 4. 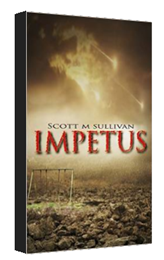