London, UK -- (SBWIRE) -- 05/09/2016 -- As the entry process for the Event Technology Awards 2016 gathers pace, organizer AMP Events Ltd has announced the Judging Panel for the event's fourth outing. The prestigious list features a host of well-known names from the wider event industry, including exhibitions, meetings, conferences, festivals and brand activations, along with some highly regarded experts from the technology sector.

Joining panel stalwarts Julius Solaris, highly respected by the entire industry; James Morgan renowned for his knowledge of start-ups and Liz King, offering an international view, will be newcomers Frankie Tee and Jon Drape adding a fresh perspective from the festival sector; Mark Bannister and Sarah Yeats delivering an agency view and Jonny Sullens wearing an exhibition hat. The panel will decide all winners aside from the People's Choice category, this will be decided via an online poll later in the year.

Commenting on the announcement Adam Parry, co-founder of the Event Technology Awards said: "Having an experienced, knowledgeable and well-respected judging panel is integral to any successful awards. It is imperative that our nominees know that their hard work and submissions will be seen by key industry experts. I think this year's panel is our best to date and they're perfectly placed to recognise the highest achievers in event tech."

Picture caption: A selection of the 2016 Judges 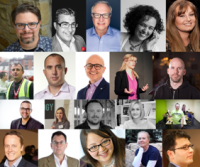