This summer, indie rockers Oh My Land look forward to releasing their latest music video and their new album, Our Love Is Dead, and having their track, “Orion (Bloodstream)” featured on WiFi PR Group’s compilation, Indie Anthems Vol. 6.

Las Vegas, NV -- (SBWIRE) -- 06/09/2014 -- With a compelling sound that is akin to artists such as Bright Eyes, Arcade Fire and MGMT, indie rock band Oh My Land, out of Paso Robles, Calif., have carved a niche in the local indie scene with several recordings and a slew of live performances in their home state. The group is now poised to release a video for their latest single “Orion (Bloodstream),” which will also be featured on WiFi PR Group’s Indie Anthems Vol. 6, and they will be releasing their next full-length album, Our Love Is Dead, this summer.

Oh My Land is made up of four members: Andrea Patton on vocals and synthesizer, Nolan Perry on bass guitar (and also the recording engineer), Patrick Patton on vocals and guitar and Rachel Coons on vocals and keyboards. Having three vocalists with three distinct timbres gives a richness and depth to their music that not many other indie bands can mimic.

The group looks to a number of different musical influences to create their full, gripping sound. These include Thrice, Arcade Fire, Cursive, The Flaming Lips, Bright Eyes, The Foo Fighters, Tilly and the Wall and Jenny Lewis. They draw lyrical inspiration from Dustin Kensrue, Connor Oberst, Tim Kasher, Robert Frost and William Blake, and they always find themselves inspired by the concept of love, whether that be romantic love, humanitarian love or the love of their God.

Oh My Land made their recording debut with their EP, If God Gave Me a Cannon… (2009), and a few years later, they released their debut full-length recording, The Mayflower Twins (2012). Last year, the group released their latest single, “The Captain’s Song” (2013) to their growing number of fans, who now eagerly await Oh My Land’s latest recording effort.

Slated for a June 2014 release, Our Love Is Dead will be Oh My Land’s second full-length album. The record will follow up the unveiling of a new music video for their next single “Orion (Bloodstream),” which they just finished filming and will release in the near future.

“Orion (Bloodstream)” will also be featured on WiFi PR Group’s upcoming compilation, Indie Anthems Vol. 6, a collection of international independent talent that WiFi PR hopes to put on the radars of music lovers and industry tastemakers the world over. Set to be released at Toronto’s NXNE in June, this digital mixtape will be handed out on 3,500 download cards to festival attendees, and 1,500 more download copies will be made available via the Indie Anthems Bandcamp page.

All of Oh My Land’s music is available for free streaming and download on their website. Digital copies of their albums can also be purchased on iTunes, Amazon and CD Baby. The band prides themselves in being able to give away their music, including all of their singles, EPs and full length albums to date, to their fans for free and have always dedicated themselves to do so with each coming release.

Fans can also check out videos of Oh My Land on their YouTube channel, including an interview with Stock Magazine (shorter version), a live performance in Gilroy, Calif., and an acoustic performance at Boo Boo Records in San Luis Obispo, Calif. on Record Store Day. 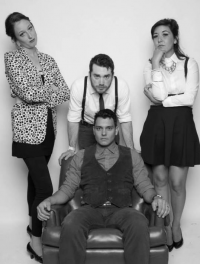