“F - - - The IRS” by Cutting Edge Growing in Popularity

Indie Rock Band Cutting Edge Taps into the IRS Protest Movement in America and is Burning up the Digital radio airplay charts.

Los Angeles, CA -- (SBWIRE) -- 03/29/2012 -- The song “F - - - The IRS” by the indie band, Cutting Edge is an ‘in-your-face’ protest song against the I.R.S. that Cutting Edge is riding as a wave of growing popularity to the doors and halls of Washington D.C. Despite the title of the song, it contains no profanity, just good rock music that reminds one of the protest movements in the late 60’s and early 70’s. The song is a call for people to stand up against the growing deficit and out of control spending in Washington D.C. In America today, we are looking at the Occupy Wall Street Movement and other such movements continuing through the summer in the United States and around the world. Government is not responding to the needs of the people and the growing deficit is out of control; and with it being an election year, 2012 could be a ‘year of change’. “F - - - The IRS” is a song that speaks to the politicians from the hearts of most Americans today and could become the anthem for such change.

Released three weeks ago by Cutting Edge, “F - - - The IRS” is already #47 in the top 200 of the Digital Radio Airplay charts along with other such artists as Lady Gaga, Usher, Pitbull, LMFAO, Train and The Black Keys. The band’s Facebook page is growing faster in the last 3 weeks and last week, Cutting Edge did a new Facebook page for “F - - - The IRS” and in the first five days the page had over 600 ‘likes’.

While internet radio is beginning to drive ”F - - - The IRS” up the charts, Radio Outlaw, a network of over 300 radio stations in the U.S. and Europe, has jumped hard on the song; giving it 8 spins a day at each station. Radio Outlaw Network President Steven Webb stated the song is “an instant hit among taxpayers fed up with the abuse of the IRS and his audience loves it”. Internet radio stations that have the song in rotation include such popular stations as 100.1 The Eagle in San Diego, 101.1 FM KLOL in Denver, KILT in Dallas, KROC in Louisville, Massive Rock Radio in New York City, Pure Sounds Radio in Chicago, Z100 Rocks in Indianapolis, Choice Radio in Columbia and Cyber MusicBoxx in Palmdale.

Due to the approaching tax season, Cutting Edge has started receiving suggestions from various fans and organizations about what to do with “F - - - The IRS”. There have been suggestions that the band send mp3s of the song to each member of Congress and the Presidential candidates, while others have suggested a Facebook campaign to have everyone replace their profile picture with the “F - - - The IRS” logo on April 12th to the 15th. As the band’s lead vocalist David Pesnell stated, “Cutting Edge would love to do these things, but the band is not sure how to proceed with these two ideas”. Pesnell further said “if anyone is interested in putting this together, let the band know and Cutting Edge is more than willing to help; everyone in the band thinks it would be great and a lot of fun”. One thing that Cutting Edge has jumped on since it is tax season, they are offering the CD of “F - - - The IRS” (the original rock version and different dance remixes by Ricky Ric) for only $1 per download at 101 Distribution.

“F - - - The IRS’ by Cutting Edge is growing popularity, but since the band is not signed to a major record label, it may prove to be impossible to receive radio airplay in the top 50+ cities in the U.S. The major radio networks usually do not play the music of recording artists that are not signed to a major label, thus eliminating the song in the major markets. The success of the song will rely upon Middle America, Small Town U.S.A., and college students. An ‘inyour-face’ tax protest song about the IRS that is being offered at only $1 seems to be an interesting concept and it will be interesting to see if the college students of today embrace it!

Cutting Edge is comprised of David Pesnell, Liza Pesnell and William Zimmerman. The band was formed in 1998 and has released six albums and have charted several songs over the years, including “Every Time I Try”, “Love Police”, “Without You”, “If The walls Could Talk”, “Your Live Is My Oxygen”, “Goliath” and others. 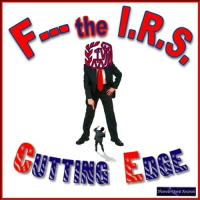