After 1983’s P.B.S. documentary Style Wars was released that catapulted Cap1 and Morris park crew MPC into the stratosphere within the sub culture.

Starting in 1977 when founding members Colt and Slip started the crew, this account continues with how Cap 1 took over and led the crew down its unforgettable path in the 1980’s. As documented in 1983’s PBS movie Style Wars. Also portrayed as the character (Spit) in 1984’s movie genre classic Beat Street.

With a penchant for going to war for train space and territory, which in turn led to the largest city-wide cross out campaign. The MPC was known as everything from a bunch of thugs who beat, hung, and shot perceived rivals to a group of talentless toys.

Wrapped up in this raw tell all about the bad boys of New York City Graffiti, chronicles the crew’s passion for graffiti, along with the real life challenges its young members faced in their urban environment.

There are so many books out now on graffiti that rely almost exclusively on images to reel you in - not so with this book (Morris Park Crew). Yes there are photographs, but it's the stories behind the images that make this irresistible. The cast of characters - and there are many - are right out of a movie. Make sure to bring your best Bronx accent and enjoy the read, I sure did!

Never forgive action, who can forget the quotes from the classic movie Style Wars, I tend to look forward and hear the true story of the MPC crew, and not the one Portrayed of Cap one, as an all out destroyer! There are always two sides of the story! This one should be interesting....

The complete history of the legendary graffiti crew, MPC, has yet to be told.  Morris Park Crew was formed in the late seventies.  The founders and most visible members were Colt and Slip.  They painted mainly on the IRT 2 and 5 lines that passed through their home territory around 180th St. in the Bronx.  Colt and Slip were innovative painters who explored modernist forms for their lettering style.  These originators were eclipsed to some degree and the reputation of the crew distorted by the notoriety of a younger crew member, Cap, who became well known for painting his "CAP" throw-up over a large number of masterpieces starting in the year 1981, unleashing a city-wide cross-out war.  This book will restore the balance by telling a more complete version of the history of MPC that up to now has been largely unknown. 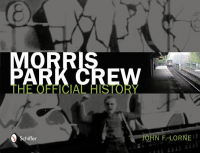