Jersey City, NJ -- (SBWIRE) -- 09/20/2013 -- Infinite Monkeys, a Singapore-based Do-It-Yourself Mobile App publishing platform announced today that it has become one of the largest publishers of mobile apps in the world, after acquiring its biggest competitor AppMakr. With this acquisition, Infinite Monkeys now serves over half a million consumers, small businesses and community groups in 60+ countries. AppMakr was developed by Socialize, which was in turn acquired by ShareThis in March 2013.

Infinite Monkeys, which offers a similar Drag-and-Drop Mobile App Builder, will continue to support all Free-Plan customers of the AppMakr platform with their existing apps. Any customer who previously signed up for AppMakr’s $79/month ad-free plan will be offered a 2-months free upgrade promotion to migrate their apps to the Infinite Monkeys platform, which is available at just $9 / month. All customer support lines and forums will be managed by the support team at Infinite Monkeys.

Jay Shapiro, co-founder and CEO of Infinite Monkeys explained: “We have always had a lot of respect for AppMakr and the incredibly loyal following they have. We were delighted to work with ShareThis to create a workable solution that lets everyone win. This is just another example of why ShareThis is one of the best social marketing companies out there for small businesses. They’ve shown their commitment to the customers today, for sure.”

Daniel Odio, founder of AppMakr and senior vice president at ShareThis, added, "Infinite Monkeys and AppMakr are a natural fit. With AppMakr technology, Infinite Monkey will have even more tools to help anyone create robust, interesting and engaging apps for any device."

Jay Shapiro added: “This acquisition takes us one big step closer towards our goal bringing mobile apps to the masses and ensuring that everyone can have an app.”, although technically that’s probably 500,000 steps closer.

About AppMakr
Launched in January 2010, AppMakr is already the leading DIY platform allowing non-developers to create sophisticated native iOS, Windows Phone and Android mobile applications, and has been used by the world’s leading brands, including Newsweek, PBS, The PGA TOUR, National Geographic, Macworld, Harvard Business Review, Mac|Life, as well as other brands including U.S. Congress and U.S. Senate representatives and committees, bands and thousands of others to connect with their users through the mobile distribution channel. Applications created with AppMakr run on multiple mobile operating systems and devices, including iPhone, iPod Touch, Android and Windows Phone devices.

About Infinite Monkeys
Infinite Monkeys is a self-serve drag-and-drop platform that enables anyone to create your own mobile app for iPhone, Android & HTML5 smartphones - without any coding. With three pricing options, from free to just $99, Infinite Monkeys brings custom mobile apps within the reach of small businesses. By servicing the long-tail of niche interests with free and low-cost apps, Infinite Monkeys aims to be the largest publisher of free mobile apps in the world. 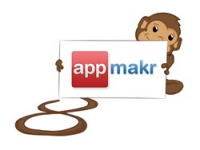