Infographic Shows the Truth About Standardized Testing, from Racism and Classism to Instructor Cheating

Up to Half of a Teacher’s Salary May Be Determined by Student Test Scores; States Reporting Much Higher Performance Than Found by NAEP

Sea Isle City, NJ -- (SBWIRE) -- 12/21/2011 -- BestMastersInEducation.com has launched a new infographic to expose the troublesome issues with standardized testing in modern education. “Teaching to the Test,” beginning with a startling quote from a district superintendent, takes a comprehensive look at where and why performance is suffering. However, it also delves into the debate of whether accomplishment on the tests should be of prime importance to students, educators, institutions and the nation.

Some of the key points to take away include:

- Because a significant portion of the school year is dedicated to test preparation, up to 18% of regular class material is ignored.
- The higher a family’s income, the better students perform on the SATs—up to a difference of about 130 points per section.
- School closures in many parts of the country, including Massachusetts, New York City and Detroit, are due to low standardized test scores.
- In 2010, 1 in 5 schools were involved in cheating on standardized tests. Either teachers or students may cheat.
- One teacher, by placing verbatim test questions on study guides, elicited scores 30-50% higher than what the same group of students achieved with different instructors. He resigned when found out.

“Teaching to the Test” goes into greater detail about the other forms of cheating practiced by students (as well as the disparate consequences for those involved), the extent of New York State’s misrepresentation of test performance, and the importance of test scores to instructor compensation and tenure. It also reveals the groups of students least likely to perform well on standardized tests, while addressing the No Child Left Behind Act and more. It’s a valuable tool for those wanting to learn more about this hot-button issue.

People considering a career in education, especially primary education, can gain relevant information about the standards placed on instructors and schools with regards to student test performance. An exploration of BestMastersinEducation.com will provide insight into obtaining an M.Ed., from choosing a school to picking a specialty and career choices. 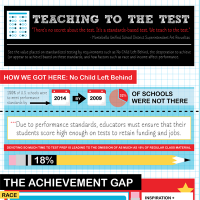