Atlanta, GA -- (SBWIRE) -- 07/10/2013 -- Christopher Jones, 19, and Catherine Van Orden, 15, have just announced that they have built a revolutionary and innovative animation app called Sketch’d. As it explains on the Sketch’d website, it is the world’s first iOS app that lets users draw anything they wish, animate it with their fingers, and then instantly share the animation with others as a looping video, or “sketch.”

In order to fund the development of the app, the teens launched a campaign on the fundraising website Kickstarter. In less than two weeks, they raised over $11,000. They were quickly noticed by Startup Grind, 11 Alive/NBC News, and platinum recording artist, Jermaine Dupri. The pair is hoping to raise at least $60,000 through the website by July 27, 2013.

As Christopher and Catherine explain on the Kickstarter website, the inspiration to create the new and clever animation app came from their own love of drawing and sharing art. What originally began as a weekend project soon took on a life of its own. After researching similar apps and realizing there was not a simple and fun way to integrate animated drawings into social networks, they decided to create their own animation app. As they noted, people have plenty of chances to share photography with others through Instagram, and a great community called Soundcloud to share music—but the chance to share original animations with others was sorely lacking.

“Why isn't there a fun and memorable app experience that allows people to share video-like drawings that they have drawn with their own fingers?” the teens asked in an article on their Kickstarter page, adding that they have set out to solve that problem with Sketch’d.

“With Sketch'd, we are taking what you know and love, creating something new, and making it elegantly simple for you to be a part of. The best part? It's all done by your fingers and a little thing we like to call 'drawmagination'.”

Anybody who would like to learn more about the new Sketch’d app is welcome to visit the Kickstarter page; there, they can read about the app and how it works. Those who wish to make a contribution to the development of Sketch’d may do so directly through the Kickstarter site. The various rewards on the site include the ability to reserve a username, receive a special iPhone case, and the ability to beta test the app. In order to get the latest updates and information about the revolutionary app, people are welcome to “like” the Sketch’d Facebook page.

About Llyt and Sketch’d
Llyt is an innovative and design-oriented technology startup that was started in early 2012 by 19-year-old Christopher Jones and 15-year-old Catherine Van Orden. The startup is currently working on a new iOS app named Sketch'd. Sketch'd is the world's first iOS app that allows people to draw anything they want, animate it with their fingers, then share that with others as a looping video. For more information, please visit http://kck.st/17zNFsN 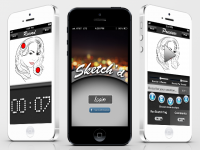