In the interest of generating buzz among potential distributors, Kevstel Group is hosting a private VIP screening of Tempting Fate for the press, distributors and few actors. The invitation-only event will be held Saturday, July 4 at AMC First Colony 24 (3301 Town Centre Blvd. South in Sugarland, Texas). A red carpet meet-and-greet and reception will begin at 6 p.m., with the screening following at 7:30 p.m.

Tempting Fate’s storyline features two brothers, one of deep faith, the other buried in a life of crime. Their worlds are torn apart when the wrong brother goes to jail and the other commits an unforgivable act. The two brothers are polar opposites: Edu Okoye (Andrew Onochie) is a talented singer and a man of deep faith whose spirituality and the love of his girlfriend Tracey (Tiffany Denise Turner) are helping him combat cancer. Edu’s older brother Ugo (Ramsey Nouah) has chosen a very different path than Edu: a life of crime. Though Ugo knows he is on a path of destruction, the life he has chosen is not an easy one to leave, and, according to his gang leader Scorpion (Dan Davies), he won’t be allowed to leave easily. As Edu’s cancer worsens, Ugo is compelled to stay in his life of crime to pay for surgery his brother desperately needs.

When a violent crime leads Ugo to stash a large amount of cocaine at the house he shares with Edu, Ugo’s sins fall on the head of his brother, who is mistakenly apprehended by police. Edu takes the blame for his brother and is given three years in prison. Shortly into his sentence, Tracey disappears. Edu is later released, feeling empty but determined to get his life back on track. Ugo, however, continues in his life of crime. It is only a matter of time before the brothers’ two worlds smash together.

“There is already a great deal of interest in our film,” Nwankwor said. “We’re currently fielding inquiries from potential distributors interested in the film’s global appeal and are looking for distribution that will get Tempting Fate seen by a wide array of audiences around the world.”

Any distributors or members of the press interested in attending the private VIP screening of “Tempting Fate” should contact Kevin Nwankwor by phone at 678.770.4210 or by email at knwankwor@kevstelgroup.com.

About Kevstel Group
KevStel Group (https://www.kevstelgroup.com) is a faith-based entertainment company that produces films, commercials and other multimedia works, publishes spiritual books, and organizes concerts, tradeshows and other events. Their ultimate goal is to “entertain with a purpose,” weaving timeless messages of hope and healing into stories and special events with broad, global appeal. Learn more at kevstelgroup.com. 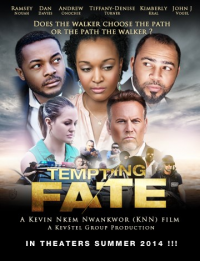