New York, NY -- (SBWIRE) -- 07/01/2013 -- Previously tipped by music insiders as ‘One of the most Talented Independent Male pop singer-songwriters in the UK right now’ back in 2008, Pierre went on to reach an impressive number 6 in the Club charts with debut single ‘Broken’, also topping Music Week’s Breakers chart at number 1. After a succession of following smaller releases, to the dismay of his fans, Pierre turned from the musical limelight to concentrating on his passion for writing.

In 2012, in between projects, Pierre met Hungarian folk artist, Szilvia Peter Szabo, 2005 Eurovision contestant as front woman of multi-platinum, 10 studio album released band ‘NOX’. After spending time together relating with their mutual passion for music, Pierre signed Szilvia with the vision to re-launch her career after a 3 year break. Bringing on board music mogul, Roy Perestrelo, Szilvia was re-signed to Universal Music Hungary and has since gone on to release a multitude of top 10 hits, and her new album, ‘Revolution’, co-written by Pierre, hit an impressive number 3 in the iTunes Charts and number 5 in the Hungarian Album charts.

It's during this time together, Szilvia rekindled Pierre’s passion to express his own journey through his own music, helping him to reconnect with the reasons behind his first starting out in music and thus, in March, Pierre went on to pen and record this later release, ‘Consciousness’.

Talking more in-depth about the style and feel of the album, Pierre explains, ‘it's really less of a pop record, which given my previous work, people might be surprised by. The album is quite adult contempory, I’ve really just sat in the studio this time and not thought about what people will want to hear, but what is real to me.’.

- The Album Features a duet with Szilvia ‘City Lights’ album

- A Youtube Preview of the album in just a matter of days reached over 100,000 views

- Pierre wrote and recorded the album in just 4 days.

As an award winning writer, Pierre is quickly becoming one of Britain’s most in demand songwriters, with an impressive and growing list of International credits. Just last week, the news was released in conversation on Twitter that Pierre will be penning a single and tracks on the new album for Brittan’s Got Talent teen star, Ronan Parke.

Listening to ‘Consciousness’, and hearing the fusion of different genres, the catchy lyrical exploration, and melodically soulful hooks, it's not hard to see why some fans regard him as an undiscovered musical genius.

- Pierre has confirmed he will be touring the album later this year and is set to announce dates later this month. 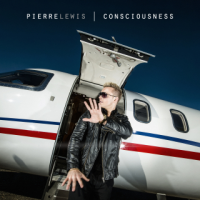