Reno, NV -- (SBWIRE) -- 11/20/2013 -- Noteworthy is a nine-member, female a cappella group based in Provo, Utah. Most of its members attend Brigham Young University (BYU) and all are members of The Church of Jesus Christ of Latter-day Saints. They appeared on the first season of NBC's a cappella competition reality show The Sing-Off in 2009. Noteworthy has also produced highly acclaimed recordings, toured throughout the USA and Hong Kong, and won the International Championship of Collegiate A Cappella (ICCA) in 2007. It is no surprise that this all-female ensemble has become one of the most popular collegiate singing groups in the nation (https://www.facebook.com/pages/Noteworthy/92181583223).
https://www.facebook.com/pages/Noteworthy/92181583223

Noteworthy was founded in 2003 by a student named Esther Yoder and a few members of BYU’s all-male a cappella group, Vocal Point. In 2006, Noteworthy released its debut album, On the Horizon, and a Bulgarian track on the album, "Kaval Sviri," was nominated for a Contemporary A Cappella Recording Award (CARA) in the best female collegiate song category. Noteworthy has since produced two other CD’s, Green Means Go (2009) and Defined (2010), which have also received CARA nominations and from which select tracks have been featured on Best of College A Cappella (BOCA) compilation albums (https://www.youtube.com/user/NoteworthyLadies).
https://www.youtube.com/user/NoteworthyLadies

“Hi my name is Shirley Cole. I am 18 years old and have lived most of my life in Cape Coral Florida; Go Gators! I am now a freshman at Brigham Young University, currently undecided and exploring what is out there. I absolutely love singing, dancing, playing instruments, going to the beach (well not here) playing volleyball, eating, and sleeping. I am the oldest of three children and have a Chihuahua named Nacho who is basically my child. A fun fact about me is that I am Mexican American and was born in Mexico City.” - Shirley Cole

"I Knew You Were Trouble" / "We Are Never Getting Back Together" Taylor Swift Mashup by Noteworthy
https://www.youtube.com/watch?v=haIyxzjhJow

ABOUT US
Based in Provo, Utah and comprised of students at Brigham Young University, Noteworthy seeks to uplift everyone who hears the group sing!  After producing highly acclaimed recordings, touring throughout the United States, appearing on NBC’s “The Sing-Off,” and winning the International Championship of Collegiate A Cappella, it is no surprise that this nine-voice, all-female ensemble has quickly become one of the most popular collegiate a cappella groups in the nation. Look around the site to learn more about these unique Noteworthy ladies, and visit iTunes to purchase and download some of their music. 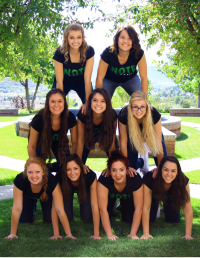 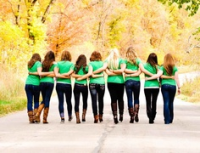