Pauze exhibited at INPEX 2012, with his invention, The Drywall Axe, a redesigned measuring tape that features a utility knife and a pencil holder. Pauze took home a merit award from INPEX. After being qualified there, a few months later, he exhibited in the InventHelp-INPEX New Product Showcase at the Electronic Retailing Association’s (ERA) annual convention, an exclusive show for the direct to consumer marketing industry. It was at that show where Pauze won the “Inventor of the Year” award beating out more than 30 other inventors. Pauze credits both his experience at INPEX and the ERA show as being the help that he needed to get his invention in front of companies. “I personally thank INPEX for helping connect me with companies and industry representatives. The recognition and publicity I received from the INPEX show was invaluable,” said Pauze.

Pauze has signed an exclusive distribution deal with Canadian Tire Corporation for his product to be sold in stores, under their Mastercraft Maximum brand. The product is slated to be rolled out in stores in mid December.

InventHelp is a leading inventor service company, who has been helping inventors since 1984. Learn more about InventHelp and their invention submission services at http://www.inventhelp.com/inventor-services.asp. 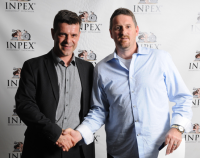