Philadelphia, PA -- (SBWIRE) -- 12/08/2011 -- Techno-mom's and dad's who are looking to keep a young child occupied while running errands, often pull out an iPad or an iPod for entertainment. Pixel Hauz is helping those parents keep young children entertained and educated with the new Little Pocket Friends Touch and Learn app. The newly released iPad toddler app helps children as young as one learn about the ever-growing world around them.

“We like to think of Little Pocket Friends as the computer version of the popular See N’ Say children’s toy. Instead of pulling a string and hearing a sound, children touch a picture that interests them. That picture becomes enlarged on the devices screen and children hear the name of the object, including the sounds it makes,” said Soon Ooi, lead developer at Pixel Hauz. “Because it’s based on the premise of a popular children’s toy, we think Little Pocket Friends Touch and Learn could turn into one of the best educational ipad apps for children.”

Besides sound, the Little Pocket Friends iPad toddler app uses bright colors to hold a child’s attention. The colors and sounds make the app easy enough for most children to use without parental help, but it can also used for a fun learning session with mom, dad or even techno-savvy grandparents.

“Often after you show a child how it works a few times, they want to do it for themselves. This is the kind of game that parents won’t mind letting children figure out,” said Ooi.

The Little Pocket Friends Touch and Learn app is available for both iPad and iPod users. It can be immediately downloaded onto either device at (http://itunes.apple.com/us/app/little-pocket-friends-touch/id483127768?ls=1&mt=8).

About Pixel Hauz:
Pixel Hauz is a development studio that specializes in innovative and interactive educational iPad apps for young minds. Their apps help early learners master the world around them with fun games that feature bright colors, sounds and kid-friendly language. Besides Little Pocket Friends Touch and Learn, they’re also the makers of Learn ABC; It’s Munch Time, which is available on iTunes for $1.99. 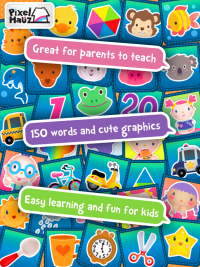